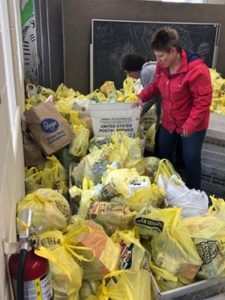 “This is our 27th year, and there was not even a cart of food before, and I knew people didn’t know about it,” said Ortonville mail carrier Rachelle Welch.
“Three years ago I started with the post cards.”
Residents donated 21 carts full of food this year, greatly surpassing last year’s total with 16 carts, about 8,500 pounds of food. There are around 5,000 households on the mail routes in Ortonville, as well as a bunch of PO boxes. On May 11, Welch and another volunteer went ahead of the mail carriers on their routes to pick up the donations beside the mail boxes so they didn’t have as much to pick up, and also met the carriers when their trucks were full.
“It’s everything, cans, boxes and everything,” said Welch. “Toothbrushes, I saw in there this time. There could be a couple cans, there’s been boxes we’ve had to get out and pick up.”
The Stamp Out Hunger food drive is an initiative conducted by the National Association of Letter Carriers, and food stays in the local communities it is collected from. The food collected in Ortonville goes to OCEF, which feeds those in the Brandon community.
“I think it’ll get better all the time,” she said. “They love it. It’s one day, and look at what Ortonville did.”