Stanley J. Skibo passed away Sept. 25 on his 79th birthday.
Stan was born in Charleroi, Pa. to John and Stella Skibo. He married his high school sweetheart, Sondra (Balmer) Skibo on June 1964. They were 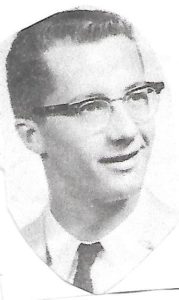 together for 61 years and married for 55 years.
Left to mourn his loss are his beloved wife, Sondra, sons Jonathan (Susie) Skibo, Jeremy (Lori) Skibo and two special granddaughters, Erin Elizabeth and Lainee Diane Skibo.
Stan attended the University of Pittsburgh on both an academic and athletic scholarship. He received his mechanical engineering degree in 1964. He was recruited by the Pittsburgh Pirates but chose to work for Boeing International, where Stan helped test and assemble the Chinook Helicopter that is still used in aviation today. He worked for Allision G.M. located in Indiana. While there he took a leave of absence and received an MBA from Indiana University, Bloomington. He also worked for Rockwell International, wrote technical manuals for Detroit ART Service and retired from BOC in Flint, Michigan.
Stan was on the Brandon Township Zoning Board for over 25 years until failing heath forced him to retire from the job he truly enjoyed.
He loved to fish with his buddies, garden, read and be with his family.
Stan always saw the glass as more than half full and loved life despite his many health problems.
At his request, a private family memorial has already taken place. Donations can be made to the charity of our choice, or simply do or say something nice to for someone. He will be loved and missed forever.