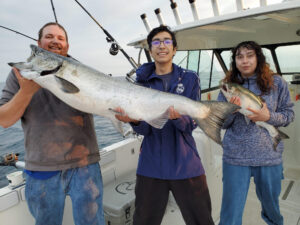 “This was my first salmon ever,” said Martinez, a student at Baker College, Auburn Hills. “We were fishing in deep water about two hours off shore with his mother and sister.”
“My mom really loves to fish,” he said. “I’m more of a hunter. But, this year my mother convinced me to go out fishing. Since it was first time out salmon fishing she told me to take the first bite of the day. We were thinking it was 35 pounds as the fight went on—we all knew it was big because the line was screaming out of the reel. The first 10 minutes was quite a fight.”
Icebreaker Charters Capt. Bobby Sullivan had the net ready following the half-hour fight.
“Captin Bobby was so excited, he looked like a kid in a candy store,” laughed Martinez.. “He was so happy.”
The salmon was caught trolling a Moonshine Raspberry Carbon Standard lure.at about 7 a.m..The boat returned to the docks in Ludington about 11 a.m.
The Lake Michigan Chinook edged out the previous record — a Chinook salmon of 46.06 pounds and 43 1/2 inches caught in 1978 on the Grand River in Kent County — had stood for 43 years.
“I must admit that any salmon I get now will be a downgrade,” he said. “It’s a great experience other than you have to get up really early in the morning or really late at night. The salmon put up a great fight and they are also great to eat.”
However, the monster salmon did not end up for dinner, rather is currently at a local taxidermist.