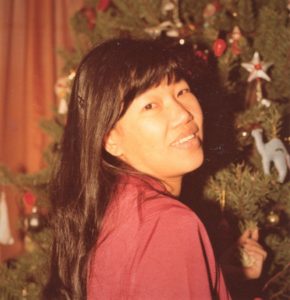 Born on May 1, 1942 in Saigon, Vietnam to Moc Van and Sau Thi Nguyen.  She married Jan Mayhew on February 14, 1971 in Vietnam.  She is survived by her loving husband Jan Howard Mayhew; six children, Hanh (Terry) Moulton, Lai Nguyen, Thong (Stacy) Nguyen, Jean (Stacy) Mayhew, Micah (Ashley) Mayhew and Sonya (Charlie) Liggett; also survived by 18 grandchildren and 6 great grandchildren brother-in-law, Loren Mayhew, and sister-in-law, Frances (Dave) Burcar and many Nieces and Nephews. She was preceded in death by 5 sisters, 2 brothers, her father-in-law and mother-in-law, Vern and Doris Mayhew.  Tam was born in 1942 on a farm south of Saigon, Viet-nam.  She met her husband Jan, in 1969 and migrated to Michigan with him and their four children in 1973.  Tammy began life in Michigan as a professional homemaker …sewing clothes for the family, knitting, crocheting, creating macramé crafts, baking bread and being a loving helpful mom.  After a few years of adjusting to American culture, Tam decided to resume and employment routine.  For the next 30 years, she worked as a nurse’s aide, plastic injection molder, machine press operator, prep chef, and sold hot peppers and raspberries from her garden.  Tam was raised Buddhist and discovered the truth of Christianity after two years in America.  She preferred a natural simple life of helping people, family games, camping, hunting, fishing, and cooking ethnic meals.  During her years in Vietnam, Tammy enjoyed the arts of Ballroom dancing and playing the Guzheng Chinese zither harp and her mandolin.  Tammy was so humble and frugal that she sometimes appeared selfish because she did not want to boast about her generosity. Tam was a longtime member of Scott Lake Baptist Church, 811 Scott Lake Road, Waterford. MI. where her service will be held on Wednesday, December 11, 2019 at 1:00 p.m.  Pastor Jon Knapp, officiating.  Family will receive friends on Wednesday from 11:00 a.m. until the time of the service at Scott Lake Baptist Church.  Interment will be at Great Lakes National Cemetery, Holly, MI. on Thursday December 12, 2019 at 10:30 a.m. Memorial contributions may be made to the Scott Lake Baptist Church or the Ortonville Veterans of Foreign Wars.  Envelopes are available at the funeral home.  Arrangements were entrusted to VILLAGE FUNERAL HOME-ORTONVILLE To send a condolence to the family, go to www.villagefh.com