‘Thank you and God Bless.’ 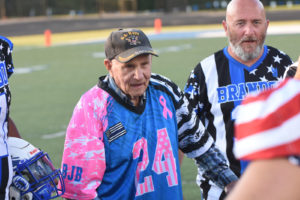 the Brandon Blackhawk vs. Owosso Trojan football game.
Maher, a Royal Oak native, served as a helmsman from 1943-1946 on the USS Pierce (APA-50) a 459 foot attack transport ship in both the Atlantic and Pacific oceans. The Pierce received six battle stars for World War II service.
Glen Venner, of the American Sportsmen of Veterans accompanied Mauer to Friday’s game.
“He feels he don’t deserve the hospitality when the Vietnam Veterans should get it,” said Venner, for Maher. “Thank you and God Bless.”