By David Fleet
Editor
Brandon Twp.- It started on the roads, but ended up in the fields of America.
Area collector and township resident Paul Vassall recently completed refurbishing a classic Doodlebug erected from a 1920 Ford Model T and 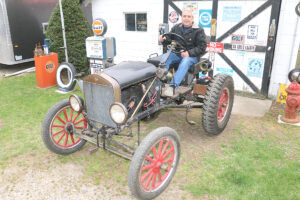 transformed, due to necessity, to a farm-work vehicle.
“When there was a steel shortage during World War II, farmers converted their family cars into a farm tractor,” said Vassall, a retired Ford employee. “The Model T was simple and featured parts that were durable.”
The Doodlebug includes wooden spoke wheels, a four cylinder valve-in-block engine and hand crank starting. It does not include, an oil dip stick, water pump or fuel pump. Speed is controlled via a hand throttle on the steering column. The vehicle includes a unique dual headlights system with both electric lights and kerosene lanterns in front.
“The kerosene lights were included to reduce horse stress for city driving,” he said.
Vassall’s classic Doodlebug was recently invited to the 69th Annual Detroit Autorama which was scheduled to proceed on April 30 – May 2, at TCF Center in Detroit. However, last week the event was canceled due to the Covid-19 numbers steadily increasing in Michigan.
According to Ford Motor Company, when Henry Ford first rolled out the Model T in 1909 it cost about $850 to produce. Then by 1924 that price had dipped to $260 due to competition. The cost was within the budget of the average assembly line worker of the time who could purchase a Model T with just four months’ pay.

The availability and usefulness of early Michigan made vehicle continued for many years. By May 1927 when production of the Model T ended more than 15 million vehicles had been produced.
“It’s not surprising when the Great Depression and World War II transformed America, the versatile Model T left the road and ended up a farm favorite,” he said. “These cars were very common back in the day, so that any car made into a tractor had earned a name of its own.”
Vassall added a six volt battery with an electric start and the rear end and transmission are from a Ford Model TT truck.
“The rear axle and transmission produce a lower axle ratio, good for pulling loads or farm work,” he said. “It’s very simple, fewer parts so anyone can work on the truck. Henry did not want discontinue the Model T, but other companies were competing for that business.”
As a retired Ford employee called the work horse.
“It’s an amazing piece of engineering,”