By David Fleet
Editor
On a cool October day—Herbert Hogan found the name of classmate Donald Newton.
“It was very emotional for me,” said Hogan, a Groveland Township resident, recalling his first trip to the Vietnam Veterans Memorial. “I knew several other names on the Wall too.”
A Vietnam veteran, Hogan’s trek to Washington D.C. last fall was thanks to the mission of Talons Out Honor Flight. The group transports any veteran from any service era to Washington, D.C. to see their memorial free of charge.
Hogan applied for the Honor Flight about four years ago and was placed on a wait list.
So on Oct. 27, 2018, Hogan joined six veterans from World War II along with 34 from the Korean War and 34 who served in the Vietnam War. The Michigan area veterans were accompanied by guardians that stay with them during the day long trip to Washington D.C.
Hogan, now 75 years old, reflected on his military service in southeast Asia more than 50 years ago.
A Detroit native and the youngest of six children, Hogan graduated St. Mary’s of Redford in 1963.

He was drafted in 1965 and joined the Navy reporting first to Naval Great Lakes Ill. then to San Diego and the USS Vancouver, a 522 foot amphibious transport ship.
While on board, Hogan served as a deckhand and a bow hook assistant on one of the 40 foot boats the ship was transporting. 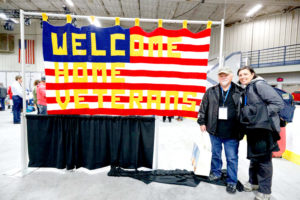 “I spent nine months in Vietnam,” said Hogan. “We transported about 1,000 Marines along with smaller boats for landings in the rivers of Vietnam. During my time (in Vietnam) Agent Orange was everywhere, they dropped it everywhere,” he recalled. “They did not realize it was so toxic—from a triple (heart) bypass to diabetes to neuropathy I’ve had it.”
“When you made amphibious landings, I was a bow hook on a smaller boat going on missions on the rivers,” he recalled.
In 2015 The Department of Veterans Affairs expanded its list of Navy ships whose crews may be eligible for disability compensation as a result of exposure to the toxic defoliant Agent Orange during the Vietnam War. Added ships to the “Brown Water” inventory, meaning the vessels were found to have operated on inland waterways, where Hogan served and all personnel who served aboard them are presumed to have been exposed to Agent Orange.
“I was not in the jungle like the Marines—but I was close to it,” he said. “We also transported prisoners on our ship and processed them. We often had South Vietnamese troops on board our ship. I got to now many of those soldiers.”
In 1967, following his stint in Vietnam Hogan recalls his flight home to Michigan from California.
“I was still in my Navy uniform on the plane,” he said. “Some lady was sitting by me in the plane asked, ‘How many people did you kill in Vietnam?’ I did not answer or even look at her. But, I got up and went into the bathroom on the plane and changed my cloths. When I returned to my seat she asked, ‘Where did that sailor go?’ I responded, ‘You pissed him off and he jumped from the plane.’ She did not answer. They recommended we not fly home or anywhere in our uniforms. Not everyone was like her that when I came home. We were just trying to get back home and continue our careers.”
“I never talked my time in Vietnam for 30 years after that,” he said. “No one gave a shit. Today, 50 years later that animosity and hostility which often characterizes the Vietnam era military has changed for the better.”
The welcome and honor received by Hogan along with the other veterans on the Honor Flight was overwhelming.
“When we arrived in DC there were about 2,000 people waiting for us when we got off the plane,” said Hogan. “I cried. You just go through so many emotions at that time with the crowds. There were little kids with flags, boy scouts, active military, people dressed in Michigan and Michigan State colors because they knew we were from Michigan and they had ties to our state. These people took time out of their day to come welcome us. They hugged us too. As a veteran I’ve never had a reception like that before.”
The group boarded four buses and with a police escort, which included stopping traffic at busy intersections visited the Lincoln Memorial, Vietnam Veterans Memorial, World War II Memorial along with others.
“By the end of the day I along with the rest of the veterans were tired,” he said. “We returned to Kalamazoo about 6:30 p.m. and they told us to not return to our cars after we landed. So, as we stepped off the plane there were buses waiting for us. And just like in Washington DC we had motorcycles, firetrucks and police cars escort us, traffic stopped at intersections it was unreal.”
The caravan traveled to Wings Event Center were more than 4,000 people had volunteered to greet the veterans.
“I was just so tired from the day and it was just very emotional,” he said.
Hogan was given a hand made “Welcome Home Veterans” quilt that will be on display at the next Ortonville VFW Post 582 meeting.
“All veterans are welcome to attend the meeting the March 20 meeting at the Old Town Hall, 476 Mill St., at 18:30 hours (or 6:30 p.m.),” said Hogan.
“If you’re a veteran we’d like you to stop by and take an application for the Honor Flight. Also, the VFW needs members so stop by.”