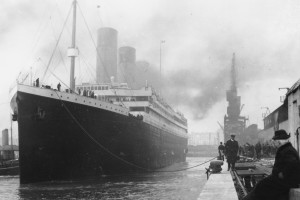 She never made it, perishing along with 1,513 others, after the RMS Titanic struck an iceberg and sank to the bottom of the Atlantic Ocean on the evening of April 14-15, 1912.

Marion was one of 109 women who died when the ship sank, and the only one of those women with personal possessions currently displayed in a Titanic exhibit at the Sloan Museum in Flint. The Edna Burton Senior Center in Brandon Township is offering a bus trip to the museum to view “Titanic: The Artifact Exhibition” on April 22.

A button and hairpin from Marion’s alligator purse are in the exhibit, along with information gleaned about the third class passenger, who referred to herself as a widow, although her husband was very much alive. The pair had separated after the death of one of their twin daughters. They also had a son.

“It was just the way society worked then,” said Alexandra Klingelhofer, vice-president of collections for Premier Exhibitions, Inc, based in Atlanta, Ga. “It was very important to maintain that you’re an upstanding woman if supporting yourself in that society.”

Premier Exhibitions, Inc. was granted sole salvor-in-possession rights to the Titanic in 1994, after being the first company to reach the wreck in 1987. As such, Premier is the only company allowed to recover artifacts from the Titanic and has done so through eight research expeditions to the site located about 370 miles south-southeast off the coast of Newfoundland, at a depth of 12,500 feet, or about 2.37 miles below the surface of the ocean.

Each expedition, in which an unmanned remotely operated vehicle or a submersible able to hold three people is sent into the wreckage, is a dangerous venture that requires years of planning and between 5 and 10 million dollars to execute.

When an ROV is used, it is tethered to a ship on the surface and sent down to retrieve items as a human guides it from the surface to pick up items using articulated arms.

A submersible, which holds a pilot and two observers, is a mini-sub with articulated arms to pick up items illuminated by lights on the vehicle as the passengers discuss where is the best location to seek objects, but is an endeavor that requires great courage.

“If a leak occurred on the submersible, there’s not much hope of getting back to the surface,” said Klingelhofer. “They have very skilled people who do this— it’s like NASA underwater.”

A cage in which to put finds is also sent down along with the ROV or submersible, as well as a basket in which small artifacts can be placed.

Recovered artifacts that are in the exhibit include intact china representing first class, with hand-painted gold decorations; second-class with blue and white delst (made in the Netherlands and still made today); and third-class, a plain white dinnerware with the White Starline logo in red.

It is not surprising that china was found unbroken, said Klingelhofer, and throughout history, china, including that from Greek and Roman times, has survived intact unless it was soft-fired.

Also surviving are clothing and many paper items from the Titanic, which is more surprising.

“Titanic is unusual in that from such a deep water site, we were able to recover clothing, postcards, letters, all sorts of paper items, many of which we could read the message,” said Klingelhofer. “They made good paper then, but more importantly, all these organic items were found in leather suitcases or leather satchels and bags and it protected them. Some might be stained, but they are still intact enough to read. Those are some of the items that are really interesting to see.”

Besides Marion, seven men who died on the Titanic are also represented in the Premier exhibit, including Franz Pulbaum, a 30-year-old who had emigrated to New York and established himself as a mechanic at Coney Island. His boss had sent him to Paris to install a ride at another amusement park owned by the company and his fate was sealed when he boarded the Titanic to go home to New York.

Postcards of Paris and Coney Island sent to Pulbaum from friends are among the artifacts in the exhibit, as well as Pulbaum’s official declaration of intent to become an American citizen, found within his suitcase.

“The formal document is much like a passport— it gives information on the color of his eyes, the shape of his face, height,” said Klingelhofer. “We don’t believe he was married or had kids. He smoked a bit. He had used cigarette advertisements he used as bookmarks in items in the suitcase.”

Sharing these stories achieves the goal of the exhibition— to continue the legacy of Titanic and all who sailed on her.

“Titanic was one of the first really global stories,” said Klingelhofer. “Through Marconigrams (messages sent by radiotelegraphy), the whole world knew what was happening as it was happening. Because of the type of ship it was, it had passengers and crew from all over the world on it. Our goal is commitment to preservation of the artifacts that tells the story better than anyone else could and to share it globally to keep the legacy of Titanic alive.”

For more information and to book your passage on the bus to the Sloan Museum to see ‘Titanic: The Artifact Exhibition,” call 248-627-6447. The bus leaves the senior center at 9:15 a.m., April 22 and returns at 4 p.m. Cost is $15 per person and includes transportation and admission. Seats are limited and on a first-come, first-served basis.