Tombstone returned to youth’s grave after more than a decade

By David Fleet
Editor
Atlas Twp.-James Vickrey was just one year, four months and one day old when he died—Feb. 11, 1860. 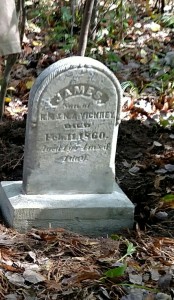 The youth’s memorial— etched on a marble gravestone endured more than 150 years of Michigan weather before succumbing to vandals who removed the marker from James burial location.
Last month they were reunited thanks to some research and hard work.
“About ten years ago James’ stone was dropped off at the Goodrich Cemetery,” said Dawn Bastian, a long time Atlas/Goodrich Historical Society member.
“The stone was moved to a secure location at the cemetery—but James was not buried in Goodrich. We think vandals removed the stone and perhaps felt guilty then just dumped it off at the Goodrich Cemetery. Honestly, I’m glad someone did the right thing and drop it off so at least we could return it.”
Bastian recently went to work on the Vickrey family genealogy to determine his final resting spot.
“I could find where the Vickrey’s were buried but not James,” she said. “But thanks to the work of Merle Perry there we noted Vickrey’s buried in a small Hadley Township cemetery on private property.”

Merle Perry, Jr., a curator of collections at the Sloan Museum in Flint was a member of the Michigan Archival Association spent years documenting all the gravestones in Genesee County cemeteries. Perry died in 1980 but his work is still used by local historians today.
“Part of the problem was James was born before the 1860 census and never counted,” she said. “Therefore James was never listed with his family when the census was published.”
James did however have plenty of family members; parents, Robert and Nancy; siblings Washington, Lodema, Delila, Jenette and William Vickery according to the 1860 U.S. Census.
“His brother Washington Vickery, enlisted in Hadley as part of the 13th Michigan,” she said. “But died of disease in Tennessee and never made it home.”
So, last month Bastian loaded the 300 pound marble marker on the back of a trailer and cleaned the stone with a brush, returning the luster to the engravings.
Bastian set the stone next to his older sister Delila near a massive white pine. Vandles had also stolen his sister Jenette’s gravestone.
“It was the right thing to do,” she said. “I just wanted this little guy to be near family members. Our local history needs to be preserved in anyway we can. If you don’t respect the people who came before you don’t respect the people of today. James had a life if only for about one year—his folks celebrated his life and grieved his death. Old cemeteries are very interesting and a part of our communities, just leave them be and respect the past.”