By David Fleet
Editor
On Dec. 20, forty-three of Michigan’s newest troopers reported to work at Michigan State Police (MSP) posts across the state after graduating from 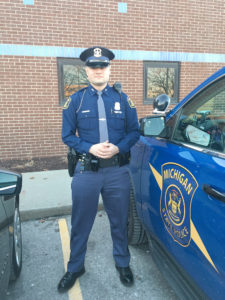 the 136th Trooper Recruit School.
Included now among the 1,238 troopers assigned statewide is 2014 Goodrich graduate Nikolas Hovey.
During high school, Hovey served as an intern with Flint and Argentine townships police departments, about 100 hours between the two, An Oakland Community College Criminal Justice graduate.
“I always wanted to be in law enforcement,” said Hovey, during an interview at the Michigan State Police Post #35 Flint, 4481 Cournna Road, Flint. “I wanted to pursue a career with the Michigan State Police as soon as possible after high school.”

Nikolas is a second generation of law enforcement. His father, Jeff Hovey was an officer at Flint Township and now serves as an officer in Gaines Township while his mother Radmila Hovey is a long time Genesee County deputy currently assigned to district court.
“That’s what I wanted to do,” he said. “I wanted the ability to help people, and especially helping those statewide as a trooper. I could impact more people as a trooper. I still want to learn as much as I can.”
Hovey will continue his field training from the Flint Post.
“The State Police are here to help citizens,” he said.
MSP Director Col. Joe Gasper administered the Oath of Office during the ceremony at the Lansing Center.
“I’m a strong advocate of fostering a positive mindset and I challenge you to look for the positives in all your experiences,” said Gasper. “The power of vision is extraordinary and incredible things happen when you are open to the possibilities.”
The 136th Trooper Recruit School began on June 30, 2019, at the MSP Training Academy in Lansing. For 25 weeks, recruits received training in firearms, water safety, defensive tactics, patrol techniques, report writing, ethics, cultural diversity and implicit bias, decision making, leadership, first aid, criminal law, crime scene processing and precision driving.
Michigan Gov. Gretchen Whitmer delivered the keynote address.
“Public service is a very honorable profession,” said Whitmer. “Thank you for choosing to serve our residents and for committing yourselves to this career. I support you and wish each of you a long, safe and rewarding career with the Michigan State Police.”
As part of the department’s commitment to community outreach and service, the recruits participated in a holiday toy drive in partnership with the Marine Corps Reserve “Toys for Tots” and adopted two families for Christmas. In addition, they hosted a Thanksgiving meal giveaway for veterans, organized a 5K run/walk with proceeds going to “Warmth 4 Warriors,” and collected items for deployed military members.
The next trooper recruit school starts Jan. 26, 2020.