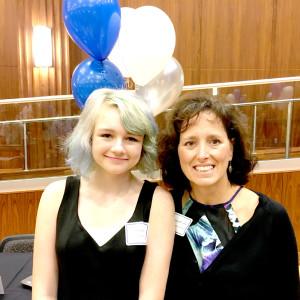 Exactly a year later, as Septemberfest 2016 was taking place here, Roman was being honored at the University of Iowa Belkin-Blank Center’s Recognition Ceremony for a memoir she wrote about the experience, with the Brandon Middle School teacher who gave her the assignment in attendance.

“The assignment was about a memorable moment in the students’ lives and a lesson they learned from it,” said Michelle Tyrrell, who teaches language arts at BMS. “Her memoir was really creative and she used quotes and song lyrics from musicians that dealt with the emotion she felt at the time. It was wonderful.”

Tyrrell was happy to accompany Roman to Iowa for the recognition, given to high achieving students in various categories, including those like Roman who were named Gold Key winners in the Scholastic Art and Writing Awards.

Roman won the award for her memoir, “I’m Only Human.” In it, she details her feelings about playing guitar and singing Don McLean’s epic tune in front of the Septemberfest crowd, whom she said gave her a warm reception despite her nerves and a few errors on lyrics in the lengthy song.

“It was about my nerves and battling emotions leading up to the performance,” said Roman. “There is anxiety that you can’t do it, but you push that down and it goes away…I had nothing to lose besides my dignity…I was ecstatic to find out I won a Gold Key.”

Music is a “huge” part of Roman’s life. Besides guitar, she also plays piano, ukulele, percussion and violin. Her father agreed to teach her how to play guitar with the stipulation that she use the skill and perform, which is how she came to end up on the stage at Septemberfest. Her Dad and sister also accompanied her to the recognition ceremony at the University of Iowa.

“My Dad was like, ‘This is a once in a lifetime thing— let’s just go and do it,’” said Roman, who hopes to enter another writing contest this fall and continue with her music. “The ceremony was really nice— just the college and the atmosphere and knowing I was among all these people who were being recognized.”

Roman is the daughter of Christopher Roman and Kim Swift, both of Brandon Township.