By David Fleet
Editor
Karen Gulf recalls Veterans Day, Nov. 11, 1945, in Milaca, Minn.
“It was a rainy, slushy day” she recalled. “My shoes and stockings were wet. My dress was wet too.” 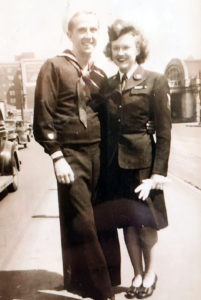 As the United States celebrated the first Veterans Day following the end of WWII—Karen and new husband Charles were celebrating their nuptials.
The couple were not only joined in marriage on a cold, wet Minnesota fall day but also their mutual service in the United States Coast Guard. On Veterans Day 2019—Charles, now 99 and Karen, 96 the parents of Ortonville residents Glennis Hubbard and Mary Pence will celebrate 74 years of marriage.
Born in Cloquet, Minn., just west of Duluth, Jan. 4, 1921, Charles Gulf who along with brother Edward were the sons of Charles and Hanna Gulf.
“They were both born in Finland,” said Charles.
The family moved to Pontiac in 1929 where his father was employed at General Motors Truck and Coach. Charles graduated from Pontiac High School in 1938 and attended Pontiac Business Institute. In 1940 he was hired by GM Truck & Coach.
In October 1942 Charles, then 21 years old along with a friend traveled to Detroit and enlisted in the United States Coast Guard.

“I passed the physical but they found a heart mummer with my friend Roy—I was in and he was out,” he recalled. “Then when I returned home that same day my draft papers was there waiting for me.”
Charles enlisted as a Yeoman and stationed at the Coast Guard Station Cleveland Harbor on Lake Erie, located on East 9th St. The Ninth District 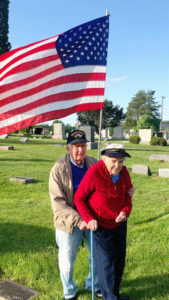 Atlantic area covered all the Great Lakes along with borders with Canada.
That same October 1943—Karen Sundberg arrived in the same Cleveland Coast Guard office.
Like Charles, fellow Coast Guard enlistee Karen was also a Minnesota native, born and raised in Milaca, about 100 miles south west of Cloquet. The daughter of Axel and Daisy Sundberg, Karen, born in September 1923, graduated Milaca High School in 1941.
“It pressed on my conscience that I had to join,” she said.
Karen’s enlistment was into the United States Coast Guard Women’s Reserve or SPAR, created about a year earlier on Nov. 23, 1942 with the signing of Public Law 773 by President Roosevelt. The name SPAR is the contraction of the Coast Guard motto: Semper Paratus and its English translation, Always Ready.
“That was the job of the women in the service was to replace the men so they could go overseas on active duty,” she said.
Karen was trained in West Palm Beach, Fla. and offered some options of which USCG base to serve.
“I wanted to go back to Minneapolis and work in recruitment,” she recalled.
However, she ended up in Chicago before an assignment to Cleveland.
“Charles and I met and worked together, then started going out to lunch,” she said. “He moved his desk closer to my desk.”
The relationship grew, then in January 1944 Charles was reassigned.
“When she came I left,” said Charles. “The joke was she kicked me out to sea.”
Charles was assigned to the Greenland Patrol on the North Atlantic, aboard the Coast Guard Cutter Storis.
The USCGC Storis was a 230 foot ship that was in service from 1941 to 2007. They sailed north from Boston to Iceland and Greenland making several voyages over his year and half at sea. At the time the Army secured several bases in the North Atlantic area. The mission was to keep the safe passage of the commercial traffic between the United States and Europe.
“We never encountered any German submarines or ships up there,” he recalled. “It was always rough up there in the North Atlantic. There were always icebergs to dodge.”
The couple exchanged mail during Charles time at sea.
“I wrote letters to him everyday,” she said.
In November 1945 Charles returned to Boston on the Storis for repair.
The leave was enough time for Charles to take a train from Boston to Cleveland to meet Karen. The couple then took a train to Pontiac, put up his car and drove to Milaca, Minn. where they were married at a Lutheran Church.
Karen was discharged May 1946.
Karen and Charles moved back to the Michigan and the Commerce area where he worked for General Motors where he retired in 1977. The couple has four children Kathleen, Mary, Robert, and Glennis. The couple also has nine grandchildren, nine great grandchildren and three more on the way.