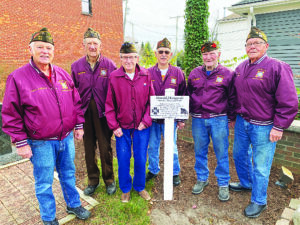 Editor
Ortonville — On Veterans Day, Nov. 11, the Ortonville VFW Post 582 rededicated a marker in Ortonville for Brandon Township resident, Don Kengerski.
On Aug. 2, 2014, Kengerski was first honored with a plaque at the Veterans Memorial Park, located on Mill and South streets in Ortonville.
Kengerski, now 92-years-old, entered the U.S. Army in March 1951 and served in combat in the North Korean countryside as a 21-year-old machine-gunner in M-Company, 32nd infantry regiment, of the 7th Infantry Division. He received 38 pieces of shrapnel in an August 1952 skirmish, but continued his duty in North Korea.
Kengerski returned to the United States and was discharged on March 5, 1954. Kengerski received the Purple Heart and Silver Star medals.
He was VFW Post 582 commander for 19 years before stepping down in 2013.