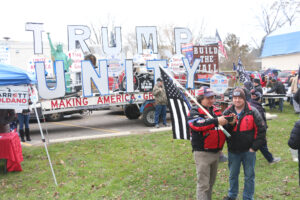 Ortonville-On Nov. 20, The Michigan Conservative Coalition hosted a ‘Let’s Go Brandon’ rally in Crossman Park in downtown Ortonville. The event was planned in about a week.
The phrase ‘Let’s go Brandon’ comes from a reporter who misheard a chant at a Nascar race. The crowd was chanting ‘(explicative) Joe Biden’, but the reporter said she thought they were saying ‘let’s go Brandon’ in support of one of the race car drivers. The phrase was quickly adopted by those who don’t approve of the current presidential administration.
“I live in Lake Orion, and I had a friend that drove through Brandon Township and called me to say he thought it might be a good place for a rally,” said organizer Dr. Phil O’Halloran. “So I reached out to the MCC and we pulled it together in about a week.”
Though there was a short timeline for the event, there will still around 100 people in attendance to see live music, enjoy food, and see the Trump Unity Float.
“We came here to support freedom and show our dislike for the current administration,” said attendee David Fenich.