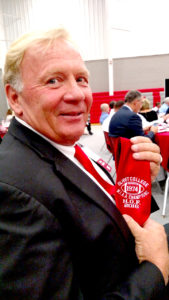 Waybrant was hired by the township as recreation director in 1999. At that time, the township was organizing local youth sports programs for the community. One of the groups he visited was the Junior Blackhawks Football who opted to kept their own identity and did not come under the umbrella of township youth sports.
“That worked out great for the Junior Blackhawks but, there was nothing for the kids that really did not qualify to play contact football,” he said.
The time for a recreational flag football program was right, he said.
“My own child got hit pretty hard playing football—we thought he had a concussion,” he said. “My son was fine but still I’ve seen some kids get hit really hard in football. Many are just not ready for that type of play. That’s why I started flag football here in Brandon—to give kids an option who want to play. They may be smaller and not ready for contact (football), or not as tough. There’s always a need for recreation— just like travel sports programs.”
The first year for flag football was the fall of 2000.

“We had 105 kids sign up for flag football that first year,” he said. “We needed this program. We also had 20 girls on those first teams too. As the years progressed the girls declined but we still get a few.”
This fall will mark the 20th season of township flag football—a program that continues to attract almost 100 youth each season from August to October.
For Waybrant’s efforts, he will be inducted into the State of Michigan Flag Football Hall of Fame on July 20 at Oxford Hills Golf Course.
While sports programs have declined slightly over the years flag football continues said Waybrant.
“We’ve seen an increase over the years,” he said. “And beginning this fall a new look flag football, to protect players even more will be coming.”
The rules are modified from high school football.
Some of the rules include a 60 yard by 50 yard field; five-on-five; three downs to score then the ball goes over; the coach remains on the field; no kicking points after, field goals or punts; one point after a score if the ball is run in from the one yard line, two points from the 12 yard line and all blitzing starts seven yard behind the line of scrimmage.
Today there are about ten teams in two age groups 6-9 and 10-12 years old.
“We get great coaches and flag football is still very popular here in the township,” he said. “The parents are great and they are all having fun out there. And I’ve seen some beautiful football plays. We are trying to teach football.”
Waybrant hall of fame induction will be his second into football stardom.
In 2016, Waybrant was inducted into the Olivet College Football Hall of Fame.
Waybrant was the tailback/ halfback on the 1974 Olivet Michigan Intercollegiate Athletic Association championship team. The team was 7-2, first team ever to win a championship in 68 years, he said. And still the only team since then.”
“I played behind the most valuable player in the league. And played his freshman and sophomore season.