By David Fleet
Editor
A Brandon grad on Florida’s east coast recently experienced what a difference a week – and a few miles – can make. 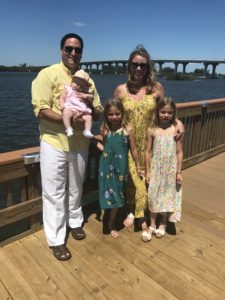 Late last month, Floridians began watching at Atlantic storm, which forecasters had predicted could bring rain and tropical-storm force winds of 70 mph. Florida residents approach tropical storms like Michiganders approach snowstorms.
“We don’t like them, but we prepare, stay indoors and hope the power doesn’t go out,” said Adam Neal, a 1999 Brandon High School and 2003 Oakland University graduate. “That is, until tropical storms become hurricanes.”
Adam grew up in Ortonville and landed a job at a daily newspaper in VeroBeach, Fla., about 140 miles north of Miami.

He and wife Michelle, a 2000 Brandon and 2005 OU graduate, have witnessed a handful of hurricanes throughout the couple’s 15 years in Florida.
“We know they shift, turn, intensify and weaken and rarely follow long-range forecasts,” said Adam, “so we weren’t initially concerned Vero Beach was in the center of Tropical Storm Dorian’s projected path several days out.”
As the week came to an end, Dorian unexpectedly grew to a monstrous, record-setting Category 5 hurricane. Its 185-mph sustained winds, 220-mph gusts and 20-plus feet of coastal flooding storm surge devastated parts of the Bahamas at landfall on Labor Day.
Then Dorian took aim at Florida.
“Our city was once again in Dorian’s crosshairs, but this time fewer than 48 hours before the potential impact of a major hurricane. Seeing what destructive hurricanes have done to the US in the last decade and a half, we knew what a storm like Dorian could do to our slice of paradise.”
While many Florida homes are built to withstand hurricane-force winds, Dorian’s threat forced mandatory evacuations along beachside and island communities, Adam said.
The Neals prepared accordingly, putting up hurricane shutters, moving patio furniture into the garage, gathering nonperishable “hurricane supplies” and lowering the water level in the family’s pool. They also gassed up vehicles, checked flashlight batteries, and made sure their twin 8-year-old daughters and 7-month old had activities, a task that was “possibly most important,” said Adam.
Then they waited.
The storm stalled over the Bahamas for about 24 hours, which slightly weakened it. Then, Dorian was pushed north, barely skirting Florida’s east coast. Vero Beach and the Treasure Coast region was under a hurricane warning for most of Tuesday.
“The storm was fewer than 100 miles from the sandy shores of Vero Beach,” he said. “We were spared of its Category 2 hurricane-force winds that were more than 110 mph, only sustaining tropical storm-force wind gusts around 60 mph. We saw localized flooding and our beaches took a beating, but luckily we were spared of the Dorian’s wrath.”
Adam characterized the week as an “emotional rollercoaster.”
“If the storm would have moved 50-100 miles west as originally projected, Dorian would have made landfall in Vero Beach. But the storm’s last-minute shift northwest was the difference between spending a day indoors and potentially rebuilding a city.”