By David Fleet
Editor
Any great story from one’s youth starts in the backyard. 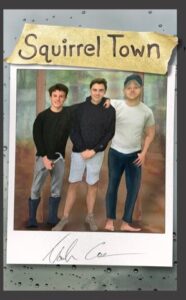 For 2019 Brandon High School graduate and township resident Noah Cox, the years growing up in Ortonville, his friends, acquaintances and family that shaped the next chapters of his life are compiled in his first book, “Squirrel Town.”
“I hope to give others a chance to read and relive some of their childhood memories,” said Cox, 21. “Most of this book was written during COVID so it gave me a chance to kind of ‘look around’ while the world was frozen.”
Cox, a junior at the University of Michigan studying business along with local companions Vinny and Elijah share their reflections growing up and all the memories growing up in a small town.
“Squirrel Town was more than just a collection of tree houses in my backyard,” he said. “Even before we started the YouTube channel based on this childhood project, we shared some of our best laughs there, learned some of our greatest life lessons, and laid the foundation for who we are today.”
“There’s much to learn from journeys that aren’t planned,” said Cox. “Some of my personal best experiences have come from decisions that were made randomly and were not planned. Sometimes we are too myopic and too laser focused on a preset journey. Looking to find adventure vs seeking specific adventure is key.”
“Squirrel Town” is available on Amazon paperback Nov. 19.
The following is an excerpt from “Squirrel Town.”
As each year had progressed with us playing paintball in the fall, one of our milestones, our aspirations, was to see how big of a “war” we could have. Part of this meant having the latest and greatest Squirrel Town structures ready to serve as forts and bunkers, but, this particular year, it also meant filming the Paintball war.
Vinny and I had talked about doing this for ages! Paintball is always intense and dramatic when you’re in the middle of it, but what about from the view of a Go-Pro on the top floor of Trump tower? Vinny was excited to figure it out, and bought a couple Go-Pros off Amazon so he could film the action!
We spent the few weeks leading up to paintball placing Plexiglass boxes Vinny had made in the trees around my backyard and at the highest points on the structures in Squirrel Town. These were what we’d use to house the Go-Pros.
In my living room, the command center was being set up. Vinny had put up a card table and put his desktop computer on it, along with a rapid SD card reader he’d bought. We were ready for action!
Thirty minutes before the paintball started (and after Mr. Bills infamously took out a ground nest with just a baseball cap and a shop vac), we turned the cameras on. Most of them lasted about two hours out of the four we spent playing that afternoon, but the results were amazing!”