‘We’ve been partners for 29 years’ 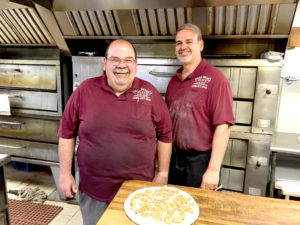 Bell is co-owner of Papa Bella’s Pizza, 425 Mill St., Ortonville. His partner, Joe D’Anna, has been in the hospital since Jan. 4 when he suffered a massive heart attack.
“We’ve been partners for 29 years,” said Bell. “We haven’t been separated this long since we opened, and I was really feeling like I was by myself now, and by myself the hard way. Not because he chose to leave but because he was taken away from me.”
In an effort to support not only D’Anna, but Papa Bella’s Pizza, Katie Quisenberry spoke to Bell about arranging a day to encourage people to order from the local pizzeria. The original Facebook post from Quisenberry had 77 comments and 134 shares.
“She had contacted me and wanted to know if it was okay,” said Bell. “I was hesitant because I didn’t know how it would be responded to so it was hard to plan for that day. Before that day, I had people calling to say they’d come in and help.”
Waits on that Thursday were up to an hour for pickup and an hour and 15 minutes for delivery.
“I did have a dozen people come in and do dishes for me, which was a huge help,” he said. “I’m thankful a lot of the customers knew what was going on and they were patient. We had almost exactly 200 orders, which is three times the business for a day like that.”
Bell says that while it’s been difficult to staff the business while Joe is in the hospital, he said their staff has really stepped up, as well as how the community has responded.
“I just have the staff picking up shifts to help me out, they’ve been great, especially on that day,” he said. “It was really cool to see how well this community has responded.”
Bell described it as something out of a movie.
“It’s like in the movie ‘It’s a Wonderful Life’ when the town rallies together to keep George from going to jail, but instead, it’s tokens of friendship for Joe,” he said. “O’Malley’s (O’Malleys Galley, 1595 S. Ortonville Road, Ortonville) sent a whole bunch of food for us the next day, and other groups reached out to help us out too.”
Bell was hesitant to name those who helped because he didn’t want anyone to be forgotten, but he extended a sincere thank you to everyone who did.
“Joe and I both felt very loved by this whole experience, and it brought the family to tears,” he said. “We put a donation jar out a few days before, and that day, people put $900 in that jar.”
As of press time, Joe was still in the intensive care unit, but he was making progress with his trach, was off of the ventilator, and was able to sit up in a recliner. He was also able to be in a wheelchair and be wheeled around the hospital for the first time. He will hopefully soon be moved out of the intensive care unit.
Anyone who would like to send cards can send them to Papa Bella’s P.O. box, 603, Ortonville. To visit the Gofundme page, go to www.gofundme.com/f/1uzowb4euo. Updates are posted on the Papa Bella’s Facebook page.