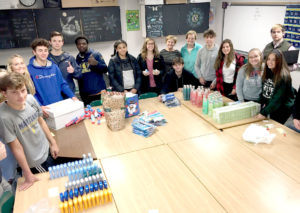 Katie Benard and her Leadership Exploration And Development or LEAD class. The class takes on what it means to be a leader in the community and participates a variety service projects. One of those projects was to assist the WRC organize and prepare “ditty bags” for veterans at the Aleda E. Lutz VA Medical Center, Saginaw.
Included in the bags are a variety of personal care items, such as soap, shampoo and combs. The LEAD students inventoried more than 700 items prior to distribution to the veterans this week.
“The VA will take the personal care items and fill the Ditty Bags,” said Carol Powers.

Powers, WRC member. “The VA needs about 1,300 Ditty Bags per year. It’s sad that many of these veterans have gone to war and they come home and don’t even have a bar of soap. And that’s just in Saginaw.”
The Daughters of the American Revolution and Daughters of the Union make the ditty bags for distribution.
“Many come home with disabilities,” she said. “They often come home and can’t find a job or can’t keep a job. It was no different than it was in the Civil War. And here we are representing the WRC today doing the same thing.”
The WRC is an active organization chartered July 1883 as auxiliary to the Grand Army of the Republic. It is a patriotic organization to provide curating and preservation of research, documents and records that pertain to the GAR and WRC. The WRC also strives to perpetuate the memory of those who sacrificed much and sometimes all in the American Civil War and to provide assistance to veterans of all wars and their widows(ers) and orphans of those that gave their life for freedom.
“It’s a good eye opener to the basic struggles of our veterans,” said Benard. “The projects we’ll do this month will focus on our service men and women.”
The LEAD students will also honor the five veterans, Angela D’Alessandro, Roger Conn, Jim Rice, Jo Warden and Chris Zoltak that work in the school district.
“When they come to work on Monday, Veterans Day, the door to their classroom will be decorated,” she said. “A lot of people don’t recognize who they are.”