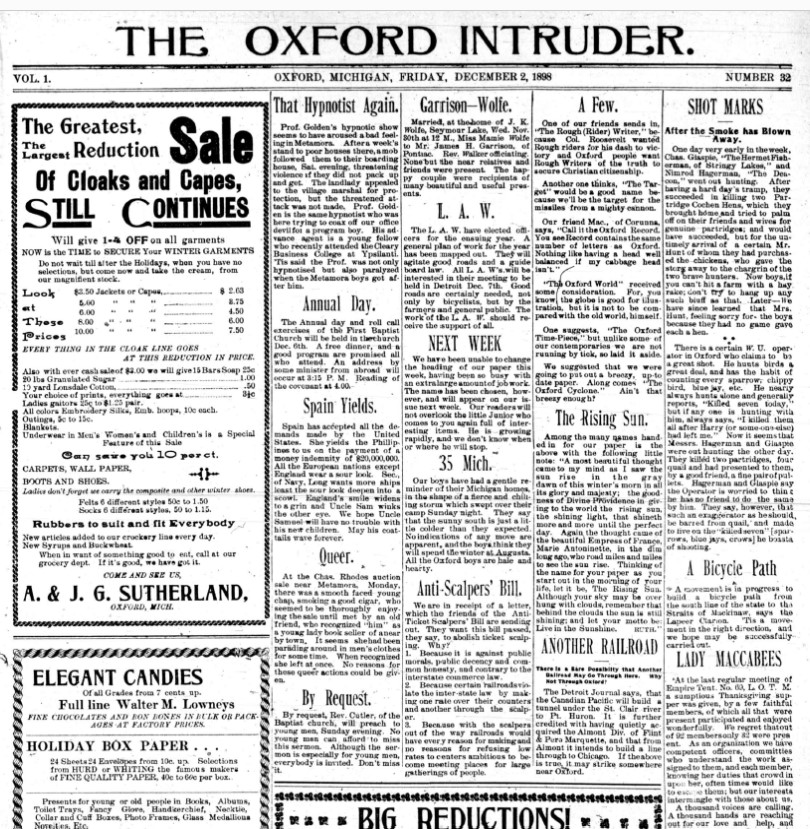 As I look out over the great expanse of today’s quick-to-opine and Judgy mcJudge world, I often think, “Man, as a society, we suck!” I am positive I’m not alone in thinking this as I am sure folks also think, “Man, too bad we can’t roll back the clock to a time when the media was kinder and gentler.” Which always brings me to my next thought.

Newspapers were not always nice.

And, I know this to be true. Since working for these newspapers (over 37 years), my offices have never been more than 50 steps from the morgue. The morgue is where old editions of our papers go to rest, in bound editions categorized by year. Not to be morbid, but I’ve always been drawn to the morgue, touching and smelling, reading and taking in local history. Yikes, some of the things I’ve read! Things we, today, would never consider writing, let alone put on the front page.

One thing I enjoy about all the local history close to me is understanding when those papers were published they were not history, merely daily life and what was happening as it happened. When I start reading the old pages, I often start down a rabbit hole reading more and more and more. A couple of weeks ago, while researching one of our “A Look Back” features was a small notice of Oxford businessmen celebrating their “first” Bermuda shorts day. I think it was in 1957, and all these prim businessmen were pictured in their shorts complete with dress shoes and black socks up to their knees. Little write ups like that just make me smile.

A hundred years ago this week in the Oxford Leader I found these “news” items:

“At the annual school meeting held at the Oxford Public School building Monday evening, Mrs. Rosa Groff was elected trustee for three years to succeed Morgan Axford. Mrs. Groff is the first lady to receive such honors, both in Oxford school district and township at large.”

And, on the same front page, “For the second time Mrs. Olga Miller has received a divorce from her husband, Frank Miller. They were married Aug. 3, 1906 and divorced in Aug. 1920; remarried Sept. 10, 1921 and separated the last time on Feb. 24, of this year. Mrs. Miller said her husband remarried her to “get out of paying $6 a week alimony for the support of their two children.”

I bet nobody alive today knew who the first woman school board trustee was in Oxford. Now, women on local boards and in government is not news, back then, just like divorce, it was.

I am grateful we have a little more tact in what we report and how we headline stories these days, too. To say old newspaper editors were “colorful” would be an understatement. Take a peek at some of the old things I’ve found from the Leader archives.

FRANK HOLTZ BLOWS OUT HIS BRAINS—GRIEF OVER DIVORCE CASE; SUICIDE COMMITTED WED. NIGHT (and then in smaller type) Shot Was Heard 8 p.m. Wed. Body Was Found Next Morning.

Following that they printed, in its entirety, Mr. Holtz’s suicide letter and a lead paragraph that could be considered a passage from horror writer Stephen King. I will leave out those gory details.

I reckon life was different in the early part of the last century. In a 1907 Oxford Leader, another headline yelled out: HAGGLED HIS THROAT WITH RAZOR AND DULL JACK-KNIFE. John Hammond of Orion Tried to Cut Throat.

Or, from 1914: ESCAPED PRISONER FOUGHT WITH ORION WOMAN TEARING HER CLOSE FROM HER

And, from the same issue: LIVE PILLAR OF FLAMES, Clothes Burned From Woman’s Body, Flesh Cooked on Bones.

I think the most yellow-journalistic headline I ever produced was from the late 1980s, wrote I: Blood, Blade, Screams at PD. Boring, right!?

Everything back in the day wasn’t written with shockingly gruesome detail. Sometimes they wrote what was then, I figure, was humor. Had you received your Dec. 2, 1898 Oxford Intruder (which would become the Leader the following week) you would have read this tidbit of information right there on the front page.

At the Chas. Rhodes auction sale near Metamora, Monday, there was a smooth faced young chap, smoking a good cigar, who seemed to be thoroughly enjoying the sale until met by an old friend, who recognized “him” as a young lady bookseller of a nearby town. It seems she had been parading around in men’s clothes for some time. When recognized she left at once. No reason for these queer actions could be given.

Yup, that was on the front page.

Death notices, or obituaries were also front page news back then. In Oxford the Grim Reaper was always “busy,” or “visiting” somebody. I am much more comfortable just putting a name and age above obituaries like we do today.

Before you get mad or despondent about those colorful days of yesteryear remember, that was then. Back then there was no social media (except for the newspaper) and there were not as many attorneys ready to make a quick buck by filing lawsuits. Wow. I just did it again . . . I went down a rabbit hole. Hope you enjoyed the ride.