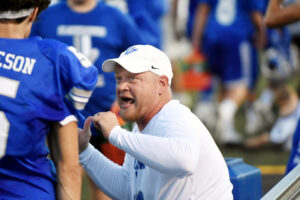 Program. Zube’s Blackhawks defeated Flint Metro League opponent Clio 55-0 to move their record to 4-0 on the season. Currently, Brandon is ranked #5 in Division 4.
“It’s very humbling to receive this honor,”said Zube. “The award is 100 percent shared with my coaching staff, players and the community given the way they have supported this team. I tell my players you can’t read the AP Rankings now, the time for scrapbooking is later and the only thing we can do if play Friday night.”
When Zube arrived at Brandon the team was not on the state rankings radar, he said.
“It took an 8-1 season year to get a couple of votes,” he said. “Alward’s team up there in Goodrich are up in the rankings every year too. It takes consistency to get noticed.”
Zube is in his 26th year in coaching and sixth season as head coach at Brandon. During this time, Zube has led the Blackhawks to five consecutive playoff berths, extending the school playoff streak to 6 consecutive seasons, the longest in school history. He has a record of 42-13 (76.4 percent) at Brandon and a 72-39 (64 percent) overall. Prior to Brandon, Zube was head coach at Pontiac for two years and Rochester Hills Stoney Creek for four years. He also had assistant coaching stints at Romeo, Waterford Mott, Waterford Kettering and Notre Dame Prep.
Each week throughout the 2021 high school football regular season, one coach that best demonstrates success on and off the field, develops players’ character, discipline, and football skill in addition to emphasizing player health and safety in their program, will be recognized for his commitment to the team, school, and community. The winner is selected by a panel of high school football media members
Detroit Lions Football Education sat down with Brad Zube to talk about the importance of using football to recognize front line workers, first responders and military personnel and to inform him of his Coach of the Week selection on Head Coach Hangout.