By David Fleet
Editor
On the afternoon of May 25, 1896, the area weather reports included some strong winds during the day, but nothing unusual for late spring in
northern Oakland County. 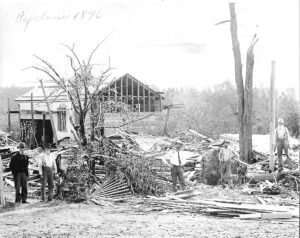 However, as evening approached and area farmers returned home from their day in the fields, the placid countryside turned deadly.
A cyclone ripped through northern Oakland County, starting near the west line of Groveland Township and the north edge of Holly Township and moving across Brandon, Oxford and Dryden townships to the east line in Lapeer County, a total of about 25 miles. The path of the cyclone started out at about 16 feet wide and ranged to about three-fourths of a mile, according to newspaper accounts.
The F-5 cyclone missed Ortonville, but gutted the villages of Oakwood and Thomas near the Brandon-Oxford townships border.
Tuesday marked the 125th anniversary of the tragic Cyclone of 1896 that ripped through the area.
Ken Bush, an area resident and local historian researched the event and created a special display at The Old Mill Museum. The museum is open every Saturday 10 a.m.-2 p.m. Bush also, recently assisted with short segment for WDIV Detroit.
“It wiped out families, farms and two communities,” said Bush. “Even if residents survived their livelihood as farmers where gone.”
Some of the victims are buried at the Oakwood Cemetery near Baldwin Road and the Ortonville Cemetery in Groveland Township, added Bush.
“In some cases whole families were killed.” 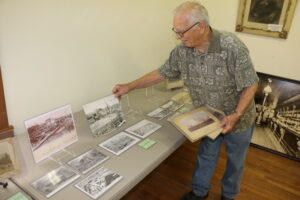 According to the Detroit Weekly Tribune, six members of the Quick Family were killed in the cyclone, including children who all lived on a Thayer Road farm north off Groveland Road.

“There was just no warning at the time, it was a complete surprise to many of the family,” said Bush
Much of the information came newspapers and area family photos.
“The reports indicated bark was stripped off the trees,” said Bush. “Groveland Township really was hit hard.”
One of the homes from the Oakwood subdivision is still standing today.

A committee, reporting back to then Michigan Gov. John T. Rich, visited the tornado area and interviewed about 190 individuals, beginning on June 5, 1896. The report filed two weeks later on June 19, 1896, tallied losses of about $162,560, which included 61 homes, and 18,047 fruit trees. Deaths were reported at 48, with 61 injured. There was no report of the foundry or elevator.
A local newspaper reported fires starting in the wrecked houses, due to the wood burning kitchen stoves as residents were preparing the evening meal. All roads were blocked, with fallen trees hindering doctors from Clarkston, Flint, Pontiac, Holly, Ortonville, Oxford and other towns to arrive. Other reports included vandalism and looting in the tornado area and law enforcement needed to patrol the area.
National Weather Service Historian Jim Shurler says that an account of the storm in the National Weather Service records includes an extensive survey of the damage.
Shurler said that 125 years ago, factors contributing to the widespread destruction from the storm included more farms in the area and thus fewer trees to impede the progress of a tornado. Also, the construction of homes has improved during the last century.
‘It’s hard to say the impact a storm like that of 1896 would have on a house today, but even a well constructed home would not have a chance in 300 mph winds. Compare the deaths today in a mobile home area. Construction is everything.
The most deadly Michigan tornado was the F-5 Beecher Tornado in the northern Flint area. On June 8, 1953, 116 were killed.