By David Fleet
Editor
Atlas Twp.-By a 4-0 vote on Tuesday night the township board of trustees approved a plaque to be placed in the community hall for Rudi Deschner. 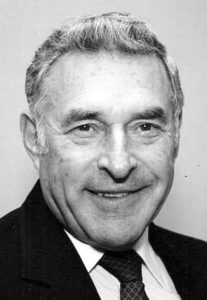 Township Supervisor Tere Onica was absent with notice.
Deschner, who passed away on Feb. 3, 2020 at 87 years old, served on the Goodrich and Genesee County Association of School Boards, Lions Club and in local government. Rudi was a Goodrich School board member for 30 years and a member of the Goodrich School Education Foundation for 20 years. He was the Atlas Township Supervisor for four years.
“As Atlas Township Supervisor, Rudi leaves us with a great legacy; the Genesee County Sheriff’s Department contracted services,” wrote Onica in a statement. “It was under his watch that we contracted for police services and disbanded a dysfunctional and lackadaisical part-time police department. This was very controversial and contentious at the time and I believe it cost him reelection to the office of supervisor. In all my research of records over the years, Rudi was a man of integrity and highly respected and he brought that with him to the office of supervisor.”
“We will continue to benefit from his legacy which is strong partnership for police services with the Genesee County Sheriff’s Department that began under his watch,” she said.
Barry June, township trustee reflected on Deschner during the Tuesday meeting.
“I agree with Tere,” said June. “I’ve stopped in and talked with Rudi many times while he was mowing his grass, because that was the best time. I asked him many time about issues in the township and what he thought. We did not always agree, but we all had the best interest of the township at heat and took his interest to heart too.”