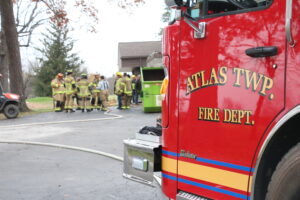 Atlas Twp.-At 2:15 p.m., Nov. 12, the township fire department responded to a fire at the Atlas Valley Golf Club, 8313 Perry Road. In addition to Atlas Township, Davison and Grand Blanc townships also responded to the fire.
When firefighters arrived an active fire was ongoing in the basement of the country club. The fire suppression system was activated and along with firefighters the blaze was contained to the basement area.
There were no injuries reported and the cause of the fire remains under investigation. Smoke was heavy requiring ventilation.