By David Fleet
Editor
On Oct.11, the Brandon Blackhawks defeated Lake Fenton 40-8 improving to 6-1 on the season. The win clinches 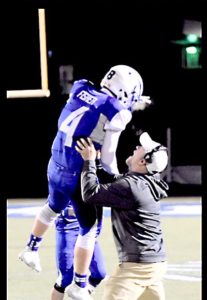 the Blackhawk’s fifth straight playoff appearance.
“Every year now that we clinch a playoff spot it’s a record,” said Blackhawk Head Coach Brad Zube, in his fourth year. “Now, we’re set up to win in the playoffs. But, we still can’t look past the next two weeks—Kearsley (6-1) and Richmond (6-1) are big measuring sticks for this team. The last two games of the season are critical for the home field advantage in the playoffs.”
In the first year of the new Flint Metro League, Brandon could again see Goodrich in the playoffs, said Zube.
“We’d like to have another game with Goodrich—that was a great high school football game,” he added. Still, we like the way they are playing right now,” he said. “There’s still a lot of little things to get us prepared for the playoffs.”
With the win at Lake Fenton, the Blackhawk’s are now 29-6 under Zube, which includes one playoff win during the past three seasons.
This season the Blackhawks hope to change that statistic as they are leading the league in scoring and have given up the least points of any league team on defense.