Bob McArthur 2021 Citizen of the Year

By Shelby Stewart
Staff Writer
The Citizen Newspaper is proud to honor life-long Ortonville resident Bob McArthur as the 2021 Citizen of the Year. 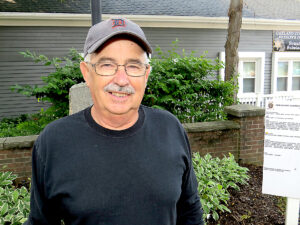 “I’ve been here my whole life,” said McArthur, 72. “My dad was born and raised in the township, Karen’s family goes back to the 1800s here. Neither of us ran off to college, so we didn’t leave the community for school, college, which happens to a lot of people. We’re not big travelers, we are Ortonville for life.”
McArthur currently is the chairman of Brandon Groveland Youth Assistance, and has been with the organization for 12 years. In addition to that, he is currently the chairman of the planning commission, belongs to the Masons, the Order of the Eastern Stars, and was previously president of the Ortonville Chamber of Commerce and chairman of the Downtown Development Authority.
He retired from the Brandon Fire Department in 2009 after 33 years of service, including 12 years as fire chief, and wanted to find something in the community to keep himself busy. He says that working with fire prevention with kids and the community brought him into BGYA.
“I think being in the fire service is what did it,” he said.
BGYA is part of the Oakland County Youth Assistance Program that has a mission to strengthen youth and families and to reduce the incidence of delinquency, abuse and neglect through community involvement. Over his 12-year involvement with the organization, he has been able to interact with the community in a new capacity.
“It’s the small, close-knit community. You know so many people, and being able to interact, no matter where you go out,” he said. “There’s such a variety of people you come in contact with that you’ve been able to help or do the work with.”

One of Bob’s favorite memories working with BGYA was helping Fran Hotchkiss of the Brandon Library with her Steps and Stories, taking the winners of the raffle to Meijer to pick out new shoes for school. BGYA was one of the sponsors of the program.
“We went to Meijer and were able to buy shoes for 13 kids for school, that was just amazing,” he said. “Makes an awful lot of work worthwhile. The shoe area is just a couple aisles, there were 13 kids in there, and there were shoe boxes and shoes all over the floor. We ended up getting them on sale, and we were able to buy socks for them along with that.”
McArthur says he doesn’t even think about how much work he puts in.
“I’ve done so many different little things, you don’t even put any sense to it, you don’t even think about it,” he said. “It’s amazing how many volunteering people there are that don’t even get recognized for it.”
As influences for his community involvement, McArthur cited examples of Ron Sutton, Dave Borst, and influences of his family.
He told a story of when he was on the fire department, and they had wanted to buy extrication tools. At the time, Ron Sutton was on the Fire Authority Board, and convinced the board not to buy the tools.
But after Sutton spoke to some of his employees at work, he came back the next month and made a motion to purchase the tools, because he had changed his mind and wanted to remedy his mistake during the last meeting.
“It was really cool to see that, to see someone say they made a mistake and fix it,” said McArthur.
He also said he is continually supported by the organizations he works with and their members.
“Take like, Judy Miracle, she’s a lifesaver,” he said. “She’s a teacher, she always knows how to look at things and how to word it to sound better than I would have.”
Miracle is currently the secretary of BGYA.
“There’s always tough times,” he said. “There’s so much free help out there, all it takes is a parent to call. People call our caseworker, and she sends them off to the next step. And most of that is free, and if it’s not, we pay for it.”
McArthur himself has three children, all of whom live close, and six grandchildren. His first great-grandson will be the fifth generation to go to Brandon Schools. His close family is one thing he sees other families missing.
“My family all lives close, so those kids knew if one of their kids had a problem at school, they’d call me up to pick them up,” he said. “We were always close with our family and our kids, we’re just really fortunate. But that’s one of the things that’s really missing, better childcare outside of the home, that would absolutely help the lower income families.”
McArthur says his goal with BGYA is to help parents and families understand how to help their children, especially when it comes to mental health issues. BGYA helps sponsor suicide prevention training, bullying prevention, and many more programs in the community.
“This community, they paid my income that entire time I was on the fire department because they’re paying taxes,” he said. “I’ve always felt that way. I want to give back to them.”
McArthur will be honored on the main stage in the Brandon Township parking lot at noon on Sept. 25.

One Response to "Bob McArthur 2021 Citizen of the Year"