By David Fleet
Editor
The Citizen newspaper is proud to honor long-time Brandon Township residents Mary Alice and Arnold Seelbinder as the 2019 Citizens of the Year. 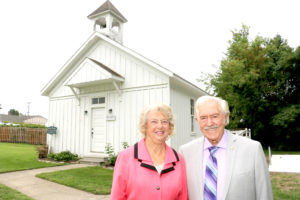 “I’m a northern Michigan stump jumper, born in Harrison, Michigan and Arnie was born in Hadley Township,” said Mary Alice, 87 who moved with her family to the Ortonville area in 1948. The couple met at Christ Lutheran Church, 5245 Hadley Road where Arnold has been a member of the church since 1926.
“We are still members there too,” she said. Arnold, 93, attended the Mann School as a youth and graduated from Ortonville High School in 1944. Mary Alice graduated in 1950 the same year the couple married and moved to Pontiac where Arnold worked for General Motors and Mary Alice at the Sears store in downtown.
“We could not stand living in Pontiac,” she said. “We wanted to return to Ortonville.”
The couple moved to nearby Davisburg while building a Brandon Township home in 1952.
Their first son, Donald was born in May 1952 and the family moved to their new home in 1953. In 1956 Arnold left Pontiac General Mortors job and worked at Owen Motors, Ortonville where he was employed until 1962.

In 1963 Arnold joined the Seelbinder Insurance Agency, a family business started by his father, Edwin in 1928.
After 91 years the business continues to prosper as the oldest agency as part of the 150 year old Frankenmuth Insurance Company. The couple’s son, Steve Seelbinder came into the family business in 1982 and operates the insurance agency today.
While living and working locally, in 1966, was one of the founding members of the Ortonville Lions Club.
“I’m the only founding member of the Lions Club remaining today,” said Arnold, named second vice-president at the 1966 Charter Night. “It was service to the community that has kept the club so successful for a half-century.”
Today the club thrives with more than 50 members and continues to give back to the community with a variety of events.
While the family insurance business and community service kept the couple busy, Mary Alice recalls spending much of their evenings on the bleachers at the Brandon High School gymnasium supporting their four sons during athletic events.
“All the kids were active is sports during high school,” recalls Mary Alice. “We supported our area schools.”
All four sons graduated from Brandon High School, Donald, 1970; Rodger, 1971; Mark, 1975 and Steve, 1979.
With Don and Rodger out of high school, in 1971 Mary Alice joined the Ortonville Community Historical Society.
“Then in 1972 Arnold joined, I convinced him the historical society was a worthwhile cause,” she said.
Mary Alice and the newly formed Ortonville Historical Society accepted their first major project of the 1856 Amos Orton grist mill located on Mill Street in Ortonville. In 1968, owner Emeling Hamilton donated the Old Grist Mill to the then nearly founded Ortonville Historical Society.
“The village asked the Hamilton’s, owners of the Old Mill, to tear it down because it was an old eyesore,” recalled Mary Alice.
In the 1980s the Seelbinders along with many others helped rebuild the Old Mill with a new stairwell and divided rooms for displays.
“We really wanted to make the Old Mill more welcoming to visitors,” she said. “I went to every estate sale in the community and begged for items for the old mill. I needed items that were appropriate to the old mill. I had classes in the second floor of the old mill for school kids.”
Then people started bringing historical items for the Old Mill displays.
“I don’t have to do that anymore,” said Mary Alice, Mary Alice served as historical society president for 12 years and co-president with Arnold for a few years. “People are donating many great items to the museum.”
Also, as members of the historical society, the couple helped with the preservation of the Mann School, originally located at Sawmill Lake and Honert roads in Brandon Township. The school functioned from 1879 until 1943.
“In the 1990s the one room school houses, like the Mann School were leaving the rural landscape,” she said.
In 1996 the Seelbinders along with others of the historical society to move the old school about nine miles to its new location next to The Old Mill. The Seelbinders along with others walked behind the Mann School as it made the trek down the area roads. Arnold attended the Mann School and today Mary Alice teaches children on field trips to the school to help them understand how school used to back in the old days.
Recently, the Seelbinders along with others have been instrumental in having an original Blacksmith shop constructed at the Old Mill property as well.
While the couple continue their support of the historical society, they also remain active in the November Harvest Suppers at the Christ Lutheran Church in Hadley Townshp where Mary Alice is active in the woman’s club and caring and sharing board. Arnold has been an elder and usher at the church.
“Their passion for people and preserving history, and all the time they contribute to bettering our community is what keeps them young,” wrote Robin Loughlin, of the Brandon Township Library, one of the nominators of the Seelbinders. “They continue to stay actively engaged in so many areas, and have positively affected many lives. Our village is a better place because of Arnold and Mary Alice Seelbinder. ‘