By Shelby Stewart
Staff Writer
The Brandon School District has agreed to a purchase agreement for $28,750 for the 2.4 acre property on Sherman Ct with a 6-0 vote. Board vice- 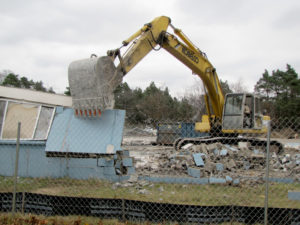 president Lisa Kavalhuna was absent with notice.
The purchaser, Joe Fetcher, wants to build a home on the property to be closer to his grandchildren.
“He is seeking to build a home there,” said Dr. Matt Outlaw district superintendent . “Our responsibility would be to do an environmental one, a phase one test, and a perc test. Those would be things on our side.”
A perc, or percolation, test is to determine the absorbtion rate of the soil, and a phase one test identifies potential contamination. These would both be done at the cost of the district prior to the final sale.

The Sherman Ct. property was the home of the Sherman Lifelong Learning Center, which was demolished in November of 2013. The building at the time was roughly 50 years old and was demolished at a cost of $47,027, and an asbestos abatement was done prior to that at a cost of $28,000. The building had been vacant at that point for a few years.
Then-superintendent Lorrie McMahon had the intention of working with the Village of Ortonville to see possible uses, though a plan was not made, nor was a sale. The building had been demolished after it was deemed unsafe for children.
The property is zoned residential, and then-village manager John Lyons had suggested the property could be included in non-motorized trails through the village, though those plans never came to fruition.