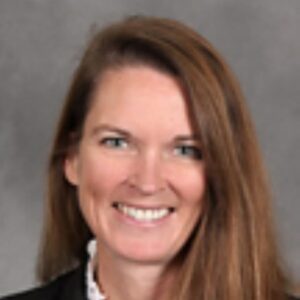 Michelle Gardner, the current GM Executive Director of Interior, Safety, and Thermal Cabin Comfort Engineering, was promoted to Vice President, Global Hardware Components and Subsystems. The move is effective June 1, 2021.
Gardner has held numerous leadership positions over her 33 years with GM.
“I lead an extremely talented team of engineering and design professionals across the globe,” said Gardner, in an interview with The Citizen last week. “My responsibilities include most of the parts that you can touch and see on our General Motors vehicles. This includes parts you can see like hoods and seats, as well as internal parts like airbags and wiring as examples. My team impacts almost everything on GM vehicles, from the up-front advanced development to the launch of our vehicles.”
Our biggest challenge in the industry is speed, she said.
A 1984 Goodrich High School graduate, Gardner earned a Bachelor of Science, Mechanical Engineering, University of Michigan and Masters of Science-Mechanical Engineering, Cornell University. Five generations of Michelle’s family have lived in Goodrich and graduated from GHS.
“The market is changing and technology is changing so quickly that the companies that can go fast will have the biggest advantage,” she added.
Gardner said she will partner with the GM Design Organization to create engineering solutions that meet rigorous standards and bring their beautiful designs to life.

Husband Jeff served on the Goodrich School Board and currently their son Alex, a 2014 GHS graduate followed in Michelle’s footsteps and graduated from the University of Michigan with a Bachelor of Science, Mechanical Engineering and is now a GM Engineer.
“I was attracted to the automobile industry because of my hero, my Dad,” said Gardner. “He put himself through college while my brother and I were young and worked his way up to owning his own tool and die company doing a lot of work with the automotive OEM’s. He and my Mom have always been my biggest fans that early on in my life gave me the confidence that I could do anything I put my mind to.”
Michelle is also the Executive Champion for GM Global Product Development & Global Purchasing and Supply Chain Women’s Employee Resource Group.
“My advice for women considering a career in engineering is to ‘go for it’ – you will be amazed at what you can accomplish,” she said. “Stay strong and determined and don’t let others tell you that you can’t do it.”
Although the statistics have improved, we still have a significant shortage of women going into Science, Technology, Engineering and Mathematics (STEM) fields, said Gardner.
According to the 2019 U.S.Census, in 1970, women made up 38 percent of all U.S. workers and 8 percent of STEM workers. By 2019, the STEM proportion had increased to 27 percent and women made up 48 percent of all workers.
“It is important to promote STEM early with our girls before they are steered away from these fields,” she said.
For example 66 percent of fourth grade girls like science and math but by college, only 20 percent of engineering majors are female.
“For some reason girls’ confidence in math and science drops from 72 percent to 55 percent between middle school and high school,” said Gardner. “But, when shown early what engineers do—76 percent of girls get interested.”

One Response to "GHS alumna promoted at General Motors"