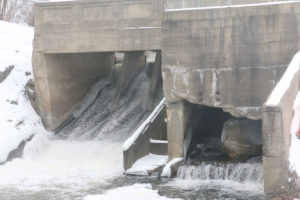 Last month, at the request of the Village DPW, Wade Trim visited the mill pond dam to observe a potential issue with the operating gates and dam structure. An area beside and behind the west water gate had a constant stream of water spraying on the downstream side, as well as behind the gate. Midland-based Fisher Contracting, who assisted the village in completing the mill pond dam repair work in 2015 was contacted by Wade Trim. The team recommended, a dive team for further inspection and complete temporary repairs until a more permanent fix can be determined. The second option for the village was to lower the mill pond to allow for direct access and visual inspection of the operating gates and structure currently submerged.
The estimated cost of the inspection and repairs was $3,875.

“For some reason the water is getting behind the angle iron,” said Matt Maybe, village DPW. “It’s a steady stream going around and coming out the back side. It’s not an emergency right now, we could wait until early summer and draw the (pond) water down to have a better look. It would be cheaper too. I don’t know what’s going on that water is going behind the concrete. The psi (pounds per square inch) is very low. It’s old. It’s just a Band Aid. A long term solution would be to remove the dam and put something else there.”
Replacement of the village dam was estimated at $2 million in 2013.
“The mill pond is a focal point of our community,” said Shannon McCafferty, village president. “Whether we approve to inspect for temporary repair now or in a couple of months is important.”
Lucas Trumble, dam safety engineer of the MDEQ dam safety unit, completed an inspection of the dam in 2016.
“The Goodrich Dam is fairly typical for its age,” said Trumble. “The significant hazard rating has nothing to do with condition; rather, it’s based on the downstream impact if the dam were to fail. The rating is not related to the likelihood of failure. There’s a bus garage and a few houses downstream on the Kearsley Creek that could be impacted. However, it’s not a large scale disaster.The dam’s fair condition assessment means it is not expected to fail under normal flow conditions,” added Trumble.
“The repairs made in 2013 and 2014 eliminated the immediate dangers on the dam,” he said. “But there still needs to be planning and long-term budgeting over a specific time frame. We know the dam is old and we encourage the council to be working with a consultant. The need to be proactive is paramount with the dam. Like many dams statewide the purpose of the dam has shifted from producing electricity to creating a pond or recreation. Therefore, we need a feasibility study done for years down the road.”
In 2013 significant seepage near sinkholes in the soil embankment just east of the dam’s spillway were reported. In at least two instances the soil gave way under foot. There were no injuries. The sinkholes were an indication of a breach suspected by village officials and dam engineers from the old dam. On Feb. 11, 2014 the village council OK’d a pair of proposals to help rectify the leaky, more than 100-years-old dam. The village council moved forward with a proposal from Midland-based Gerace Construction for $43,925 to determine the cause and repair of the leaching village dam. Details of the process included removal of the westernmost watergate to drain the mill pond, excavate down about 13 feet (approximately 70 cubic yards of material), and repair leaking joints on both the north and south sides of Hegel Road. In addition, the council also OK’d, for WadeTrim to assist in obtaining permits, contractor coordination, site observation and documentation of the project. The cost to the village is an additional $8,000 according to the agreement. In June 2014 workers discovered an artesian well from which water flows under natural pressure without pumping when they were digging under the west side of the embankment. That time the MDEQ inspected the dam and required some significant repairs to the structure. Then only three of the five wooden flood gates, which move up and down to regulate the amount of water and the level of the mill pond, were operational. Two of the gates remained stationary. The state inspector required the village to remove the two stationary gates and replace with movable gates.