By David Fleet
Editor
About a week ago Kelly Belanger could see the Puget Sound from her downtown Seattle apartment. 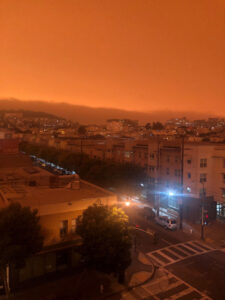 “The smoke rolled in last Friday (Sept. 11),” said Belanger, a 2012 Goodrich High School graduate and current Amazon Web Services employee. “Since then the air has become very hazardous and we just can’t go outside. We have to keep the window shut and at one point we had the worst air quality in the nation.”
Belanger is just one of millions near the fiery West Coast, where the fires have killed at least 36 people and burned through an area larger than the state of Connecticut, say news sources. The crisis has forced 220,000 people to flee their homes in California, Oregon and Washington — and it could be weeks before it’s safe for them to return, the American Red Cross reported Wednesday.

Seattle has been shut down since March due to the coronavirus, said Belanger.
“Up until last week you could go out for a run or walk,” she said. “Now you can’t even do that, so you’re really just stuck inside. I went out for groceries and the visibility was less than 100 feet. I live one block from the Puget Sound and now I can’t see it due to the smoke.”
Locally that same smoke choking the west coast has moved east, but is high enough that residents in Michigan aren’t breathing it.
JR Kirtek is the chief meteorologist for ABC Channel 12 News Flint. With more than 35 years experience, such wind patterns creating drifting smoke are not new.
“All that smoke out west gets up in the jet stream at 20-30,000 feet or higher and goes east,” said Kirtek. “That’s what produces the grey-pink color and the orange sun. We’ll need a shift in the jet stream to make that change.”
It’s not uncommon for the smoke to travel, he said. In 2016 a wildfire began southwest of Fort McMurray, Alberta, Canada that produced smoke which came east over Michigan.
“The smoke could even impact our weather making it a little cooler,” he said.
Kelly’s sister, Chelsea Belanger is a 2010 Goodrich graduate and is currently an account executive with Salesforce located in San Francisco.
“Since the lightning induced wildfires in mid-August, air quality in the Bay Area was among its all time worst – hitting up to an AQI of 218.”
The Air Quality Index or AQI is a yardstick that runs from 0 to 500. The higher the AQI value, the greater the level of air pollution and the greater the health concern. For example, an AQI value of 50 or below represents good air quality, while an AQI value over 300 represents hazardous air quality.
“It has persisted much longer than usual as smoke is also coming from wildfires in Oregon and Washington in addition to California,” she said.
“With the pandemic, I’ve been working remotely, which fortunately allowed me to escape the San Francisco air quality and head back to Michigan for a few weeks,” she said. “Right after I left, there was a day where the entire city looked orange.

It was dark even mid-day and raining ashes – friends and colleagues were sending pictures and video chatting and it really did look like mars. It was like nothing any of us have ever seen before.”
“It’s been a sad and scary time for many west coast residents,” she said. “The death toll is still rising and there have been so many houses and properties destroyed. Outside of San Francisco in the Bay area, many of our friends have had to evacuate on multiple occasions.”
The massive west coast fires forced others to flee inland.
This past March Cooper Teare, 21, a University of Oregon senior and son for former Ortonville resident Dave Teare was at the NCAA indoor nationals in Albuquerque N.M. The 2021 5,000 meter Olympic hopeful was just hours away from running the 3,000 meter championship race, which he was favored to win, when the meet was canceled as a result of the coronavirus.
Now the largest outbreak of wildfires in Oregon history producing dangerous air quality has further hampered Cooper’s training.
“The air quality in Eugene will be extremely unhealthy for weeks to come curtailing any possibility of serious training,” said Teare. “We returned to campus a few weeks ago, but were stuck inside and could only run on a treadmill.”
Teare along with his UO track teammates made a 12 hour trek east to a small community about one hour south of Bozeman, Montana to train.
“When we left Eugene at 4 a.m., the visibility was about 10 feet in front of the car,” he said. “We’re in the middle of nowhere at 5,000 feet elevation, but the air is much better.”
“My plan is to do a few races this fall and get ready for the Olympic trail standard this next summer,” he said. “Once the smoke clears we can get back to work.”
Cooper is currently ranked the number two NCAA cross country runner in the nation, and has run a 3:55 mile and 13:32 5,000 meter. He will be taking a red shirt fifth year at the University of Oregon in 2021, and will be competing in the Olympic trials next June, which will be held in his own backyard at Hayward field in Eugene Oregon.