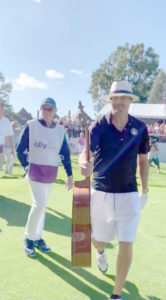 On Sept. 14, Ron Pelshaw along with his family, Ryder, 9, Jovi, 12 and wife Leah were near the 17th tee box during the Ally Challenge, at the Warwick Hills Golf & Country Club in Grand Blanc.

The township family was attending the 54-hole play golf tournament featuring 78 PGA Tour Champions professionals competing for a $2 million purse.
A few hours into the tournament Ron recalls the celebrity foursome of Jack Nicklaus, Kid Rock, Dierks Bentley and Henrik Zetterberg, teeing off on 17.
“Kid Rock hit the water on that hole,” said Ron, a 2000 Brandon High School graduate. “It was a nice day and later that night our family were going to attend the Dierks Bentley concert at the nearby driving range at Warwick. It was my son’s first concert too, so it was a pretty special day.”
Soon after the foursome teed off someone from Kid Rock’s entourage handed the entertainer an autographed Dean guitar.
“The group were not that far from us and the crowed was going crazy when they walked by,” recalls Ron. “Kid Rock just walked over and handed the guitar to my son Ryder, they fist bumped and then shook hands with me. Ryder’s a big fan of Kid Rock now.”
While Ryder plays the piano he now plans of leaning to play the guitar too. However, dad suggested the Kid Rock guitar will be put away.
“I play the guitar,” said Ron. “I played one Johnny Cash song with it and now we’re just going to hang it on the wall.”