On Wednesday about 70 Brandon High School students walked out of class as part of a nationwide protest over gun violence and to remember the 17 killed at Parkland High School. Photo by Patrick McAbee.

By David Fleet
Editor
Seventeen names. Seventeen minutes.
On March 14, at 10 a.m., for 17 minutes, Brandon and Goodrich high schools joined others across each time zone as students, school faculty and supporters around the world organized walk outs and silence at their schools to honor those killed in the massacre at the Parkland high school Feb. 14—one month ago. 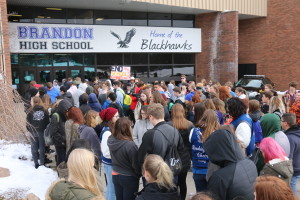 “The walk out is a message to the world—enough is enough,” said a 17-year old Brandon High School Senior who remained anonymous. “We walked out for the 17 killed in Parkland and to seek stricter gun laws. The schools try to protect students but really our fear is the world we live today. It’s not the fault of the school rather it’s about gun laws and the rules around guns.”
The senior said at 10 a.m., students could stand up and quietly walk out of class to front of the Brandon High School building near the flagpole. They would stand there for 17 minutes. “Three of us spoke with administrators in private on Tuesday regarding the walkout and came up with a plan,” she said. “The turnout was great, it was peaceful and effective.”
The walk out is part of the the #marchforourlives to raise awareness about issues of school safety and the impact of gun violence.

The senior said that not everyone in the school or the district agreed with toughing gun laws.

“We live in a conservative community,” she said. “I really want our state and national government to take youth more seriously. We are the generation who will shape the world in the future. We need a voice in how that will turn out.”
Many students support more stringent gun purchasing rules especially for those with a history of mental illness, she added.
“The school shootings are scary because it’s becoming way too common place now,” she said. “We are marching to remind the world to not sweep the 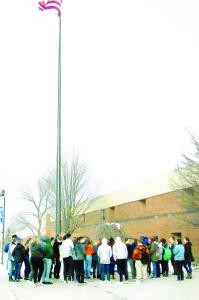 tragic events of Parkland, Columbine or any other shooting under the rug. Rather, keep the memory of those individuals and work for reform to make real change.”
Matt Outlaw, Brandon School superintendent said the students response on Wednesday was outstanding.
“Our student leaders organized a very nice, student-led and student-initiated tribute inside the school,” said Outlaw. “The students asked that the classes work silently for 17 minutes. The student leaders read a statement and then announced one of the victim’s names (of Parkland) every minute for 17 minutes. The reading of the names was powerful. We also had between 60 and 80 students that stood around the flag pole in silence during the reading of the names.”
“For the school district, our focus continues to be on improving safety for our students and staff,” he added. “We have been doing a major review for the last month and we will be rolling out some significant safety improvements moving forward.”
In the Goodrich School district five students read the 17 Parkland High School names aloud at 10 a.m. on Wednesday. The students remained in the classroom but paused for a moment of silence.
Ryan Relken, Goodrich superintendent said that five students approached the administration regarding the Parkland shootings and discussed a way to honor those victims.
“We met three times and concluded the best way would be to read the names aloud and have school wide silence,” said Relken.
The students stayed in the classroom as the names were read school wide.
“Our kids today demonstrated what student leadership is,” said Mike Baszler, high school principal. “They did not pressure anyone. I was very proud of our students today and understanding the essence of leadership and they demonstrated that today.”

One Response to "#Marchforourlives"