By David Fleet
Editor
About 6 miles of M-15 separate Goodrich and Ortonville. On Sept. 27, the Brandon Blackhawks will make that trek 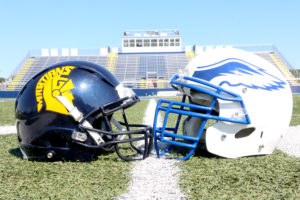 north and visit the Goodrich Martians at 7 p.m. at the Roy U Stacey Athletic Stadium to continue a battle that dates back to the early 1950s.
“It’s always more than just a football game with Goodrich,” said Blackhawk head coach Brad Zube (26-8) now in his fourth season. “It’s exciting to be part of this big rivalry and this year a league game.

“We are going to play this game with a neighboring community whom we have 100 percent respect for and care about. The Holly and Goodrich football games are boarder battles that are talked about for years and players grow up with memories for the rest of their lives. This game was a point of emphasis when I was hired at Brandon. Both teams are excellent and they want to get at each other. This game could also determine a league championship.”
The Brandon-Goodrich game will now be a yearly event as the Martians are now part of the 12 Flint Metro League teams which include the Blackhawks. The expanded Flint Metro League will crown a champion this fall.
“It’s a big game no doubt,” said Martian Head Coach Tom Alward (146-106), now in his 28th season. “They are like our cousins who we’ll now play each season. We are looking forward to bringing the Milk Can Cup back to Goodrich this year. Brandon is a good football team and they are on a roll. The Blackhawks are going to give us everything we are looking for in a tough team. Every game is different, but these rivalry games are special— the kids are going to be excited to play.”
“We want games like this, it’s a meaningful league game,” he said. “We are 1-3 with Goodrich and we need to get back to a winning record. There’s plenty of interaction with the students during the school year and it’s a battle for bragging rights. Brandon is class organization and very well coached—the game is exciting for everyone.”
According to the Michigan High School Historical Game-by-Game results, the Brandon-Goodrich rivalry dates back to 1952 and continued until 1992. In 2014 the rivalry was rekindled as the Martians won 33-7. Then in 2015 Zach Clements hit the game winning 37 yard field goal propelling the Blackhawks to a 11-10 victory over the Martians. It was the first win for the Blackhawks since 1986 and narrowed the overall series to 30-12 in favor of Goodrich. Then in 2016 Blackhawk Kevin Bickett raced for four touchdowns as the Blackhawks topped the Martins 35-14 at a packed Roy U Stacey Stadium in Goodrich. The win was the second straight for the Blackhawks over the Martians and was the debut for new coach Brad Zube.
After not playing in 2017 the battle heated back up in 2018 as the Blackhawks victory streak continued over the Martians with a 26-7 win at Brandon stadium.
Now with the series record at 30-14 in favor of the Martians
For three out of the past four years the Blackhawks have kept the Milk Can Cup trophy awarded to the winner of the rivalry. The can was donated by Brandon Township’s Cook’s Farm Dairy and is a symbol of both communities’ rich farming tradition. Each year the score and date are etched on the cup, with the winning team keeping the cup until the next season.
In 2018 the Flint Metro League approved Goodrich, Corunna and Lake Fenton to join beginning at the start of the 2019-2020 season in August. The move created a 12 team league with two divisions of six schools based on enrollment. Now, with higher enrollment schools are the Stripes Division which include Fenton, Flushing, Holly, Kearsley, Linden and Swartz Creek. The lower school enrollment make up the Stars Division, Brandon, Clio, Corunna, Goodrich, Lake Fenton and Owosso.
The nine game football season includes five division games, three non conference games and a cross over game at the end of the season where the first place Stars Division will play the first place Stripes Division team for the overall championship. Similarly, the number two through six teams in the division will also play.
.