By Shelby Stewart
Staff Writer
It was known as Camp Owosso—the fenced-in compound consisted of rows of tents, each home to six German prisoners. 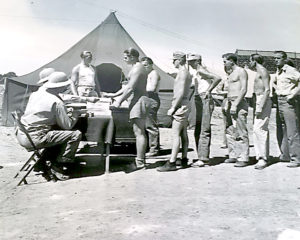 “I spent some of the time in the guard tower watching over about 400 prisoners at a time,” recalled Gerry Marsh, an Ortonville resident, who in 2010 was interviewed by The Citizen and served at the local POW camp. “Some were Gestapo, the secret state police. There were some tough Germans in that camp. Many of them were not Nazis, but they had been forced to fight in Hitler’s army against their will. All some wanted was to go back home. But for the most part they never tried to run away from the camp, they really liked it there.”
Marsh who served in the Fifth Armored Division, died in Nov. 13, 2013, was just one guard at the German Prisoners of War camp about five miles west of Owosso near M-21 (Corunna Road) and Carland Road, now the site of the Owosso Speedway.
“They never tried to run away. As a matter of fact, toward the end the Army took away our ammunition when we were guarding the prisoners,” he told The Citizen. “I guess they figured on one would get hurt if there were no bullets.”
The Owosso POW camp is one of several in Michigan that will be discussed at 6:30 p.m., May 20 by author Greg Sumner during his presentation on his new book, ‘Michigan POW Camps in WWII’ at the Brandon Township Public Library, 304 South St., Ortonville.
“It is the story, little-remembered today, of the 6,000 German and Italian prisoners who were brought to Michigan beginning in 1943,” said Sumner. They lived in 32 camps scattered around the state, and helped fill the critical labor gap, especially in agriculture. The ‘bad guys’, the hard-core Nazis and fascist bullies, were weeded out, leaving mostly well-behaved, homesick young men held under minimum security conditions.”
There were 32 camps throughout the state of Michigan, with most being in the lower peninsula where 5,000 of the prisoners were held. At the end of WWII, prisoners were returned home.
“The best part, for me, is that, despite official rules against ‘fraternization’, many formed enduring friendships the Americans they worked for,” said Sumner. “A significant number later returned to pursue U.S. citizenship.”
Summer began researching the topic after writing his last book, Detroit in WWII, where he discovered the Italian POW camps at Fort Wayne, which led him to look further into the camps state wide.
“In my talks around the state I have heard many stories from audience members who had prisoners work for their families, and their comments are usually warm and respectful terms,” he said. “I’d like people to take away a sense of pride in this chapter of Michigan history, and how we kept our ideals of humanity even in the midst of a catastrophic global war.”
To register for the program, go to brandonlibrary.org or call 248-627-1460.