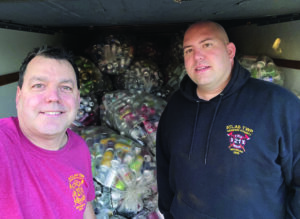 Last year Township Firefighter Ben Rhode suggested the idea of having a can drive to help raise funds for the local firefighter’s association. The collection was enhanced due to the suspension of returnable beverage containers via Gov. Whitmer Executive order in March. Area residents responded to the cause as often stickey containers piled up around the house during the pandemic lockdown.
“I thought it was a great idea,” said Ed Klimek, township assistant fire chief.
So did the residents—as 20,000 containers arrived over the course of the collection time. Placed end-to-end the containers would have stretch about a mile and a half. With the assistance of Orion-based Powers Distributing who picked up the containers and the township who helped store them, more than $2,000 was raised.
The Atlas Township Firefighters Association used that money to purchase LED flares, LED Stop/Slow signs and four radio headsets.
“The signs and flares will help provide better safety on roadway emergency calls especially at night,” said Klimek.  “The LED signs light up automatically when raised and can be visible over 1 mile when illuminated.  The LED flares came in a six-pack storage case that doubles as a charging base.”
“Both, the signs, and flares have lithium-ion batteries with 12-15 hours of battery life before needing a charge,” he said.  “The headsets will be useful on major calls when communication is vital.  On structure fires, the headsets can help block out truck noise so the engineer will have better communication with the incident commander as well as the incoming trucks providing water.”

“Years ago, when I first joined the fire department, we used to have spaghetti dinner fundraisers for The Atlas Township Firefighters Association,” said Klimek.  “The money raised would go towards purchasing equipment for the fire department that might not necessarily fit into the budget but could be especially useful for the safety of our firefighters.  The cost and logistics of putting something on like that every year became too much causing the fundraiser to fade away.”