By David Fleet
Editor
With a wooden walking stick in hand—Ron Sutton’s iconic daily stroll around Ortonville, pausing often to chat with friends and neighbors along the way, 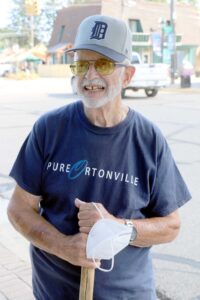 exemplified his mantra—’Just treat everybody like you’d like to be treated. It doesn’t take much to say ‘have a nice day’ or ‘hello’ or ‘how are you.’
Sutton’s words are just a few of the memories that will remain as the community reflects on his life.
Sutton died Dec. 17. He was 91.
Ron Sutton was born in a home on Bald Eagle Lake April 20, 1929 to parents William and Ruth (Hemingway), with siblings Orra, Robert and Maurine. He moved to Ortonville from Groveland Township in 1940 and after he graduated high school in 1948, Sutton married Mary Lou Cooper in June of 1950. The couple was married for 55 years, and she passed in 2005. They have two daughters, Sherry Jacobs and Luann Mann and three living grandchildren, one that passed away, seven great grandchildren.
As a community leader Sutton served on the Brandon Fire Department, as a Brandon Township trustee, Brandon Township Elections Board, as Co-Chairman of the Ortonville-Brandon United Fund Drive, Ortonville Cemetery Board, the Ortonville United Methodist Church board, a life member of the Ortonville Masonic Lodge #339, Ortonville Eastern Star # 286, Past Worthy Patron and Shriners International.
Ron’s daughter, Luann recalled her father’s dedication to the community remembering back in the early 1990s, when his granddaughter Nicole played on the 1994 Brandon High School State Championship softball team.
“At that time the (Brandon) school district did not have a decent softball field,” recalled Luann. “So when he was asked to help do something about that he took on the task of organizing, planning and building the current Brandon Girls High School softball field.”
“He could have very easily said no – ‘my granddaughter won’t be playing on it because she graduated,’” she said. “But he didn’t. He told my sister that, ‘Your grandpa (William) Sutton told me early on that if you live in a community and make it your home then you need to be involved with it and make it the best community you can.”
“Dad put his heart into it like everything else he did,” she said. “He knew the field would never benefit his granddaughter but that didn’t matter.  Little did he know while he never watched Nicole play a game on that field years later he would be sitting in the bleachers watching her daughter, his great granddaughter Leah play games on that field. It was all about God, family and community.”
Former Brandon Fire Chief Bob McArthur, who retired in 2009 after 33 years with the department, recalled Sutton’s actions while on the fire board.
“Ron has been a great friend to our family,” said McArthur.  “In the early 1980s Ron had made a request to purchase the ‘Jaws of Life’ for us to extricate trap victims. Ron had convinced the balance of the board that it was not a necessary piece of equipment for the fire department, they turned it down.  At the very next meeting he stood up and said that he had made a mistake and was wrong, he had investigated his decision and found he was wrong. As a young firefighter I was so impressed that someone of his stature in the community would admit his mistake and correct it in front of everyone, that stuck with me for the rest of my life.”
McArthur also recalled the purchase of the first ambulance in the community.
“Ron asked why the insignia on the truck only said Brandon Fire Department and did not say ‘Ortonville,’” said McArthur.
“The next day an order was placed for it to be added, this also stuck with me of the importance of our community name to be out there. Ron was a special person that unbeknownst to him had been a mentor for me.”
Sutton also served as historian for The Citizen newspaper—his extensive knowledge of Ortonville and details of names provided photo captions for photos used in the annual historical calendar published each November.
Wayne Wills, former village president was a neighbor to Sutton for more than 43 years.
“In this life, we all know that there are takers and there are those who are givers,” said Wills. “Ron Sutton was the consummate giver. With the love and support or his late wife Mary Lou, and lately the love of his entire family, he gave and continued to give for much of his 91 years.”
“This past summer, at the young age of 91, and at the request of several community residents, Ron, with the blessing of his daughters, Sherry, LuAnn and the family, was once again given the ‘green light’ to run for Village Council. On Nov. 16 he attended, via Zoom, his first council meeting and jumped right in.”
“But, God had other plans,” said Wills. “Now Ron is counting on us to step up to the plate and help to make the world and Ortonville a better place for all.”