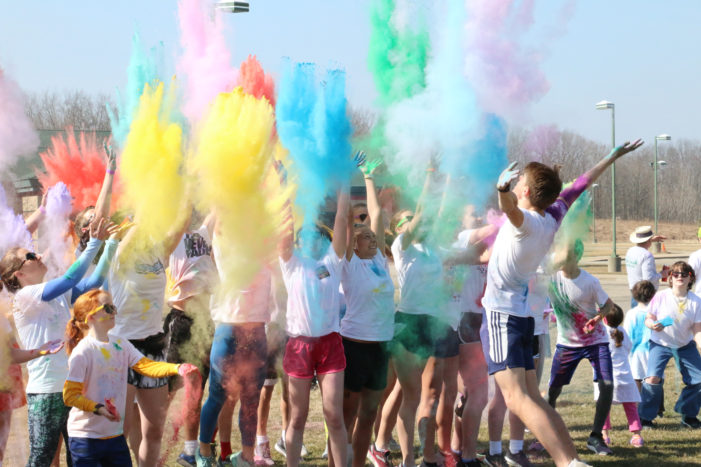 Senator Ruth Johnson takes oath
By David Fleet
Editor
On Wednesday Ruth Johnson took the oath of office for State Senator for the 14th District.
Johnson, 64, had served as Michigan’s Secretary of State since 2011, announced her candidacy for the Michigan State Senate 14th District in April to replace Sen. Dave Robertson, R-Grand Blanc, who could not seek reelection due to term limits. The 14th District includes Brandon, Groveland, Highland, Holly, Rose, Springfield and Waterford townships along with the cities of Fenton, and Lake Angelus. The district also includes southern Genesee County.
“I think our greatest challenge as a state is to continue making public policy that promotes our current strong economy and low unemployment,” said Senator Johnson, in an interview with The Citizen on Wednesday. “Another challenge is to ensure that education opportunities for our youth – and for adults – keep pace with the demands of the jobs of today and of tomorrow.”
Missing township man found dead after search
By Shelby Stewart
Staff Writer
Brandon Twp.- On Jan. 11, Oakland County Sheriff’s Office Brandon substation deputies and other emergency personnel conducted a search for a township man who had been reported missing. He was deceased when he was found.
The 52-year-old man had been last seen at 12:15 a.m. when he left his home on Zarieda Street of his own accord. His roommate reported that he had refused to take his prescribed medication and had left the home wearing only shorts and shoes. The man was schizophrenic and bipolar.
Village weed free
By David Fleet
Editor
Goodrich- No weed sales in the village.
On Jan. 14, the village council voted 5-0 to adopt Ordinance 19-1 for the prohibition of marijuana establishments. The vote comes after a special meeting last November when the village council voted 5-0 to approve a resolution to prohibit marijuana establishments within the boundaries of the village.
The resolution followed a new state law that went into effect Dec. 6 after voters decided to legalize marijuana for adult recreational use on Nov. 6 by a 56-44 percent margin. Michigan is now the first state in the Midwest to offer legalized weed. In 2008 Michigan voters OK’d medical marijuana. In the village, Proposal 1 followed state voters and approved recreational weed 510 yes to 440 no.
Of 1,429 registered voters 67 percent cast ballots.
Several residents and council members addressed the changes recreational marijuana would have on the community during the public hearing.
“We were advised by our council to decide now (on marijuana establishments), “ said Council member Doug McAbee. “We would have no say if we did nothing (regarding the recreational marijuana).
I had people (residents) call me both yes and no (for selling marijuana in the village), it was a pretty even split.”
One to go
By David Fleet
Editor
Goodrich-Just 10 games into his 20th season at the helm of the Lady Martians, head coach Jason Gray is on the edge of history.
Gray, with a career record of 399-66 all at Goodrich, needs to tally just one more win to join an elite group of about 40 girls basketball coaches in Michigan sports history with more than 400 wins. The Martians (6-4) will go for that win on Jan. 25 when they travel to Cournna. The veteran coach will join local record setting coaches, Kathy McGee, Flint Powers Catholic, 599-153 (1976-06), Ian Smith, Oxford, 493-135 (1975-01) and Art Pelzer, Frankenmuth, 423-44 (1975-93).
“I try to not to think about number 400,” said Gray, 44, before the game Friday. “The only reason I do (think about 400 wins) is because people talk about it. Right now my focus it’s about these kids and the games, of which we’ve lost more than we are accustom to. But my support group including the team, the athletic director and my wife they are more excited than I am. As I look back over the past seasons and try to think why I’m here at 400, we have been fortunate as a school to have the consistency of great students.”
February
Pot not sold here
By David Fleet
Editor
Groveland Twp.-On Monday night the township board of trustees voted 5-0 to prohibit all marijuana establishments within the boundaries of the township.
“We are not doing anything that changes someone’s right to use marijuana,” said Bob Depalma, township supervisor. “Or grow it under the requirements for personal consumption. The issues is we (as a township) do not have the ability to manage or facilitate commercial operations located here. We have so few pieces of commercial property here. I don’t know where you’d put it? We are not going to put the (marijuana) shop in residential areas or the recreational area.”
The township joins, Atlas and Brandon townships along with the Village of Goodrich to ban pot sales. Ortonville is yet to address the law.
The township ordinance follows a state law that went into effect Dec. 6 after voters decided to legalize marijuana for adult recreational use on Nov. 6 by a 56-44 percent margin statewide. Michigan is now the first state in the Midwest to offer weed for recreation.
Sold: Belle Ann Elementary
By Shelby Stewart
Staff Writer
Brandon Twp.- The Belle Ann Elementary School building has sold.
On April 23, the Goodrich Board of Education completed its audit of student discipline practices at Oaktree Elementary.
In January the school board had started an investigation at Oaktree following alleged disciplinary issues that involve the superintendent’s son.
Superintendent Ryan Relken distributed a letter on Jan. 14 stating that a group of parents are making assertions that students who are protected under the Individuals with Disabilities in Education Act (IDEA) are physically harming other students.
The Individuals with Disabilities Education Act (IDEA) is a federal law that requires schools to serve the educational needs of eligible students with disabilities. Schools must find and evaluate students suspected of having disabilities—at no cost to parents. Autism, deaf-blindness, deafness, emotional disturbance, hearing impairment, intellectual disability, multiple disabilities, orthopedic impairment are some of the disabilities.

On Feb. 11, the school board voted 5-0 to sell the building to buyer Chuck Schneider.
Trustee Kevin McClellan, was absent with notice and Trustee John Chartier abstained from the vote due to a conflict of interest. Schneider previously made a presentation to the board, stating that he intends to live on the property and house his many collectibles.
The property is zoned residential, and he would also like to open areas of the building to the public for charity events, art shows and field trips.
“I like his offer,” said board president Diane Salter. “The discussion and the package he put together, well done. I like the idea that we could have an artsy type deal going on and we could have events there.”
March
Remembering Terrible Ted
By David Fleet
Editor
Bill Haney met Ted Lindsay for the first time in July 1953.
“I was behind the counter in the pro shop at Sylvan Glen Golf Course, in Troy,” recalls Haney, a Brandon Township resident and long time author. “Three pro athletes I recognized right away came in. They were three of the most famous players in the history of not only the Detroit Red Wings, but also in the world of pro hockey. All were to become Hall of Fame players and all had their numbers retired and their banners raised in the Wings’ arenas. Terry Sawchuk, perhaps the greatest goalie ever; Gordie Howe, considered the greatest all-around player of all time; and Ted Lindsay, not only a member of the Wings’ famed Production Line, but known as “Terrible Ted,” the toughest player in the National Hockey League.”
On Monday Lindsay died at this Oakland Township home.
He was 93.
April
Walking with Ron
By Shelby Stewart
Staff Writer
Ortonville- Ask Ron Sutton a question regarding the last 100 years of Ortonville history and there’s a good chance he’ll know.
From 2-5 p.m., April 27, the Ortonville United Methodist Church, 93 Church St., will host a 90th birthday gathering for Sutton—whose worked, served and lived in the community, touching the lives of others in a variety of ways.
“I just guess that I’ve always liked Ortonville,” laughed Sutton. “Even though I didn’t actually move to town until 1940.”
Ron Sutton was born in a home on Bald Eagle Lake April 20, 1929 to parents William and Ruth (Hemingway), with siblings Orra, Robert and Maurine.
“Everyone but my father contracted Scarlet Fever and our home was quarantined for awhile,” he recalls. “The doctor came out and put a big pink sticker on the house.”
The family moved to a farm on Sands and State Park roads, which the family lost in the Great Depression, then to Oakhill Road in Groveland Township, and later to home on the corner of Narrin and Mill streets in the village.
May
‘Extreme partisan gerrymanders’
By David Fleet
Editor
On April 25 a panel of three federal judges ruled that 34 congressional and state legislative districts in Michigan are extreme partisan gerrymanders and unconstitutional. Of those areas possibly impacted by the ruling are the 51st State House, voters in Atlas and Groveland townships along with Village of Goodrich; the 14th State Senate and the 8th Congressional District covering Atlas, Brandon and Groveland townships.
In the 146-page opinion, U.S. Circuit Judge Eric Clay ordered state lawmakers to redraw maps in time for elections in 2020. The opinion, was joined by District Chief Judge Denise Hood and District Judge Gordon Quist.
The judges ruled in favor of the League of Women Voters of Michigan along with 11 other plaintiffs that their First and Fourteenth Amendment challenges to the state and congressional redistricting plans.