By David Fleet
Editor
On a early June morning Leonard and Kathy Biera boarded a Brittany Ferry for the six hour trek from Portsmouth, England across the English 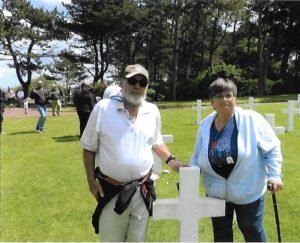 Channel to La villa Port Winston, France.
“It was suicide,” said Leonard, a U.S. Navy submarine veteran, as the boat approached the cliffs on Pointe du Hoc, France. “They were sacrificial lambs, the cliffs are just so high I just can imagine scaling those with heavy gear. The barbed wire is still there today.”

Leonard’s reflection centered on the Western Allies of World War II invasion of German positions at Normandy on the coast of France 75 years earlier in the early morning hours of June 6, 1944.
The Biera’s had made the trip to observe the anniversary from their Hadley Township home a few days earlier. On June 7, they traveled to Normandy and paid tribute to the sacrifices of all involved. The trip honored the couples Navy family—four uncles and one father that served including a sailor on the USS West Virginia one of the hardest hit ships during the attack at Pearl Harbor, Dec. 7, 1941.
“I kept thinking of all the ships out here in the channel that morning in June,” said Leonard. “Where are the German Uboats? Where were the mines in the channel? It’s difficult to comprehend they made the invasion all in one day, they were on a time schedule, they had tides to worry about, then the troops were coming on shore wave after wave. That’s what I was thinking at the time we approached France from the sea.”
A Detroit native, Leonard is a 1964 Warren Fitzgerald High School graduate. In March 1966, he enlisted in the Navy and attended boot camp at Naval Station Great Lakes, Ill. He was transferred to Naval Submarine Base New London, Groton, Conn. In early 1967 he flew to Pearl Harbor where he boarded the 327 feet, USS Greenfish (SS-351) a Balao-class submarine. He was later transfered to the 269 feet, USS Gudgeon, a Tang-class submarine. He served as diesel engineer on both submarines in the Pacific ocean. In December 1969 his active duty ended. He served two years of inactive duty and was discharged in 1972 as a Second EN2 (SS) DV Class Scuba Diver.
“Parts of the artificial harbor the Allies built are still near the beaches of Normandy,” he said. “There’s German bunkers still there; the massive pot holes where Allied bombs dropped are still in the ground and the German tank barriers are still on the beach.”
While near the beaches Leonard encountered a Normandy soldier who had come to visit.
“The soldier was in his 90s and had ribbons and medals on his chest,” he said. “I shook his hand and said, ‘Thank you for saving the world.’ He said, ‘thank you.’ And then asked where I was from. I told him Michigan and he responded by saying, ‘I’ve fished there before.’ He later recalled his fishing location was the Mackinac area.”
Near Omaha Beach Leonard and Kathy were provided flowers to place on the one of the thousands of white crosses in the cemetery.
“There are crosses as far as you see,” he said. “Each one faces west toward the United States. I walked up from behind the crosses where I could not read the names on the markers. I decided to place the flowers on a grave that had none, so picked one at random. I just so happened it was a soldier from Michigan.”
During the two days on the beaches of Normandy military planes were remembering the D-Day with continual fly overs.
“There are German artifacts in the museums too,” he said. “There are also German cemeteries have black crosses.”
Kathy and Leonard returned home on June 11.