By David Fleet
Editor
Groveland Twp.-For the past two years Olivia McDowell has been on a mission in her pajamas. 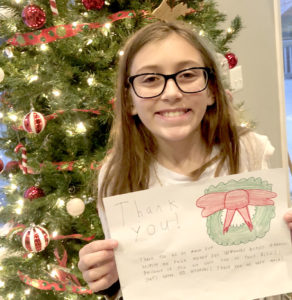 But, don’t be fooled by McDowell’s rather casual attire. The 10 year old fifth grade student at Holly School District Patterson Elementary School donned the nighttime garb to raise funds to honor veterans.
It all started last year, when McDowell invited her grandfather Art Greene to a Veteran’s Day show at her school.
“My grandfather is a Vietnam War veteran,” said McDowell, a township resident. “After the show we visited the Holly Moose Lodge were I leaned more about veterans not to mention about my grandfather’s time while serving in Vietnam. After that I really wanted to do something for him and other veterans.”
Her mother Sara McDowell suggested Wreaths Across America as a way to honor veterans.
Wreaths Across America, this year Dec.14, is a movement to cover all veteran graves, nationwide with wreaths. Locally, wreaths were purchased by donations and will fill an estimated five, 40-foot-long Walmart semi trucks and delivered to Great Lakes National Cemetery in Holly. Volunteers than place the wreaths on veteran’s graves.
To get donations for wreaths, McDowell decided to ask her classmates to pay $1 to attend school in pajamas for a day. Following approval by Patterson Principal Margaret Kraemer the project pajama day was on.
McDowell promoted the event in the classrooms, via school announcements and even a phone message home to all Patterson families.
“Many students donated more than a dollar,” she said. “There was an overwhelming amount of support for this project. They were very proud to honor veterans and many said they had family members who served also. A lot of family members donated money too.”
The first year tallied $1,400 for the wreaths. Then in 2019 the project jumped to $1,665— enough to purchase 111 wreaths.

“Olivia exemplifies what Bronco Pride — perseverance, responsibility, integrity, dedication and excellence – is all about, and we are extremely proud of her leadership in honoring those who have made the ultimate sacrifice to protect our freedoms,” said Scott Roper, Holly Area Schools superintendent. “At Holly Area Schools, we promote a culture of kindness, compassion and respect. Olivia’s wreath project embodies all of these qualities by giving back to our supportive community.”
Olivia is the daughter of Sara and Ryan McDowell.

One Response to "Student raises funds for Wreaths Across America"