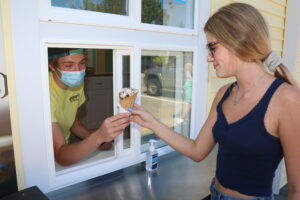 “We’ve had customers arrive in golf carts and four-wheelers, everyone is flocking here for ice cream,” said Rob.
The ice cream store is attached to an historic building and residence of S.B. Pixley who once operated a hardware store dating back to the 1870s. During the last century the red brick clad two story building was also home to a cafe where Goodrich students would eat when the high school was located in the village and a Masonic Lodge.

An addition was constructed later which is now home to Lippy’s.
“This was a COVID project—it’s a corner stone building that was rejected,” said Tami. “We tried to do something during the COVID (pandemic) it’s been a stressful time. It’s been successful so far.”
Tami said the yellow color of the ice cream store was selected to be the “light” of Goodrich.
“Residents have been requesting a bakery or a coffee shop move in next door,” she said. “But right now the ice cream is keeping us very busy—it’s been overwhelming.”
Lippy’s features Northville Mich. based—Guernsey Ice Cream.
“Cotton Candy Ice Cream has been the best seller so far,” said Tami. “Ice cream has been the ‘thing’ during COVID. There’s a take out window, they are not going to get shut down, it’s making everyone happy.”
Daughter Kylie Lipp, a Goodrich Senior, has been the brainstorm behind the project and Son Jayden, a GHS sophomore built the menu.
“It’s been a family project,” she said.
Lippy’s is open Monday-Saturday noon-9 p.m. and Sunday 2- 9 p.m. Hours will change this fall. Call (810) 636-9043.