Tin Can Tourists:Michigan made trailers

By David Fleet
Editor
The 1953 New Moon travel trailer was 32 feet long and then cost about $5,300 right off the lot in Alma, Mich. 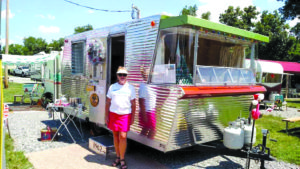 The trailer became famous when Lucille Ball & Desi Arnaz traveled cross county in the 1954 movie “The Long, Long Trailer.” Soon after they were married Tacy and Nicholas Collini invest in the motor home so they can see the country together—the adventure on the road and turmoil they encountered were notable as was the trailer.
“That vintage trailer was just one of many built right here in Michigan,” said Dawn Bastian, an Atlas Township resident and long time member of the Tin Can Tourists, America’s oldest trailer and motor coach club. “The trailers of the 40s through 60s reflect a time when America families can get on the road and visit America. There were good roads such as the Lincoln and Dixie Highway to travel just about anywhere in the United States.”
From 11 a.m.- 3 p.m., May 18, as the Tin Can Tourists will gather at Camp Dearborn, 1700 General Motors Road, Milford to celebrate their 100 year anniversary. Featured will be more than 40 Michigan made vintage travel trailers. The club, once the domain of travelers in the early 20s who drove Model T Fords and tented along the sides of America’s two-lane roads, the very beginning of a $ 13 billion RV industry.
“It was the beginning of travel in the United States— Henry Ford and his Model T, roads were getting better and tourism with the automobile was on the rise,” she said.

Included in those are Beemer and Grubb Enterprises, Ortonville; Holly Coach Company, Holly and Owosso Mobile Homes, Owosso.
“It’s nice when you go back in time to an era of travel that was a lot more simple then today,” she said.
Bastian’s traveled the Lincoln Highway stretching from Times Square in New York City to Lincoln Park in San Francisco. She owns a meticulous, painstakingly restored vintage 1966 Scottie and 1962 Holiday House trailers. Bastian has traveled with these trailers on the Lincoln Highway pulled with a 1966 Chevy II, to Florida and on a circle tour of Michigan.
“Lucy and Ricky’s trailer will be in Milford to check out,” she said. “It’s a lot of fun to step back in time and visit America’s love affair with the open road.”