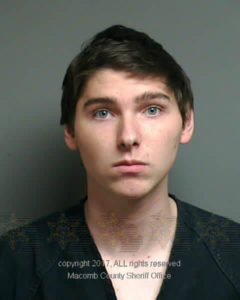 a police officer following a trial and jury deliberation.
Christopher Berak, 24, was found guilty on Nov. 1 of killing Oakland County Sheriff Deputy Eric Overall, a deputy with the Brandon Substation, on November 23, 2017.
Overall was struck and killed early Thanksgiving morning when he was putting out stop sticks on M-15 near Seymour Lake Road to disable Berak’s vehicle.
Berak was fleeing law enforcement from Lapeer and the chase continued south on M-15 through Brandon Township. Investigators say that around 12:30 a.m., Berak’s vehicle veered off the road and onto the shoulder and allegedly struck Overall.
Overall was a deputy with the Brandon substation and had served as a Brandon School District liaison officer.
Judge Leo Bowman set his sentencing on Dec. 10, 2019 at 3 p.m.