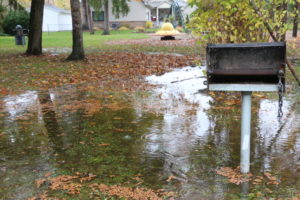 first motion was to have a topographical survey done for the Schoolhouse Street drain the second to repair the drain at the Cedar Street basketball court, and the third to have a graphic depiction and prepare cost estimates for the Crossman Park Drain.
“This drainage, as everybody knows, has been plaguing that park as well as the surrounding residents for some time,” said president pro tempore Dan Eschmann. “We are heading in the direction that we’re going to be spending a sizable amount of the resident’s money to support this project. And when I say sizable, it’s probably in the neighborhood of $100,000 to complete it once we move forward. That’s the direction we’re headed, we know it’s needed, and I believe we’re pretty confident that this project will correct the flooding that’s in Crossman Park and how it affects the surrounding neighbors.”
In addition to Crossman Park, Schoolhouse Street frequently floods, and the drainage issue was not addressed when the street was redone. They are going to be searching for a fix of that following a topographical survey, which will hopefully fix the issue. There is also a problem with the drainage on the basketball court on Cedar Street.
“There’s some flooding in that area, and we got it open and dug it out to see what we could do and determine if we could make a repair ourselves on it, and found out that the drainage basin is tilted and in bad shape,” said village manager Dale Stuart. “And the pipe leading out of it for five or six feet is broken up.”
The three projects were approved and will move forward, though when a fix will be finished on each project is unknown.