By David Fleet
Editor
Atlas Twp.- It could ramble down the road at about 40 mph, carry a hefty cargo and still looks sharp enough to drive to town. 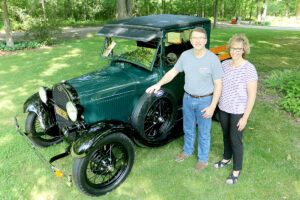 Between 1928 and 1931 Ford rolled out 482,000 Model A pickup trucks— delivering an early hint of vehicle versatility still evident in many popular models on the road today.
“Those trucks worked hard and owners just wore them out,” said Chris Green, a township resident who, along with son Adam recently spent about two years refurbishing Model A pickup. “So the are rather hard to find in real good shape. The mechanics were fascinating—and the popularity of Model A’s allows for plenty of parts on the market.”
Green purchased the rusty 90 year old truck at an Ohio Auction.
“It had sat outside for several years and included a few buckets of parts along with it,” he said. “We had the four-cylinder 40 horsepower engine rebuilt and just cleaned up the transmission, it still works. The engine starts great compared to the earlier Model T’s since it includes an electric start using a six volt system. Our goal was to make the Model A just like it came out of the factory. Honestly, Henry (Ford) was very frugal and efficient and that is reflected in his cars.”
For example, the car was equipped with a only a left hand taillight and no turn signals; the roof is stretched canvas and Ford woodworkers carved interior and exterior pieces. Electric high beam or low beam headlights, one manual windshield wiper that drivers reached out and operated. The front windshield pushed open at the bottom for ventilation and there was no heater.
Green is a member of the Script ‘A’ club with common interest in the Model A Ford the way Henry Ford built them.
“We are a group that connect to the past with the Model A,” he said. “Many members owned Model A’s years ago and provide a unique glimpse regarding how it goes together.
Robert Kreipke is Ford Motor Company’s Corporate Historian and manager of Ford Photographic.

“The Model T had run its course,” said Kreipke, during an interview with The Citizen last week. “Sales were down and the customers wanted a change.  Although the transition from the Model T to the Model A was difficult and needed to be accomplished quickly, the Model A turned out to be much more attractive than the Model T.”
The Ford Motor Company had purchased Lincoln in 1922, said Kreipke.
“Henry Ford’s son Edsel Ford, oversaw Lincoln. Edsel Ford borrowed several features from the Lincoln which made the Model A much more attractive. The Model A was becoming a car that was both utilitarian, and also a vehicle to be proud to ride around in.”The Model A was assembled in more places than just the Rouge plant. Model A’s were assembled in many Ford assembly facilities. “The Ford Rouge plant was the facility with the largest output,” he said. “The Great Depression naturally had negative effects on the production of the Model A. Henry Ford was a positive thinker and continued to promote the Model A to the public. In 1929 many new Models were added to the already eight available models.”