By Shelby Stewart
Staff Writer
A 2018 Goodrich graduate is bringing esports to the Goodrich and Ortonville areas.
“This is my home town,” said Aaron Cottrell, coach and coordinator for the North Oakland XPLeague. “I was working for an XPLeague in Macomb, but we decided to do it ourselves, my dad and I.” 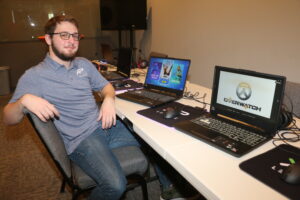 Cottrell, who runs the league with his dad Paul, said he has been into video games since he was little.
“While I was at college, I was on the Western Michigan University esports team, and I was also the social media manager,” he said. “I just saw the potential for gaming. We have kind of a running joke because when I was going away to college, my dad told me ‘you can’t make money playing video games’ and here we are.”
Cottrell also said he’s been working with church youth groups since he was in middle school, and has always had a passion for working with children.
“I’ve always enjoyed seeing them grow and have fun along the way,” he said. “And I saw the potential to do that through something I enjoy and that I’m knowledgeable about.”

Currently, the games that XPLeague plays are Fortnite, Overwatch and Rocket League, all of which the individual franchises play as a team.
“Games have a toxic stigma,” said Cottrell. “What we’re doing, and what XPLeague is doing, is taking them and putting them in a positive, team environment.”
Two concerns Cottrell has seen from people wary about esports are violence and anger. He cites multiple studies that show no correlation between video game violence and real violence.
“The anger when someone is playing games comes from being alone,” he said. “I don’t let the kids get angry. I want them to understand that mistakes are okay and that as long as they’re learning, they’re doing a great job.”
Esports have been on the rise in recent years, and colleges are giving out scholarships for esports players to join their college teams.
“This is a great opportunity to play in the future,” he said. “These kids become a little family, they’re a close team.”
Currently, the team practices at Bridgewood Church in Goodrich, 10291 Green Road, Goodrich. For anyone interested, they can email aaron.cottrell@xpleague.gg. The program is for ages 8-15, and there will be tryouts for their Overwatch team on May 23-26. Registration for tryouts is required.
By next year, Cottrell hopes to have a team in the finals in Raleigh, NC.
“We started at a time that we were not ready for qualifiers for nationals,” he said. “But I think for next year we can have a few teams at the finals, I hope.”

One Response to "XP League comes to town"