Nikolaus Kovasity, 83, passed away July 15, 2022, at his home in Ortonville.  Nick was born in Mokrin, Yugoslavia in 1939, at the onset of WWII.  His father was drafted into the Army, and later in 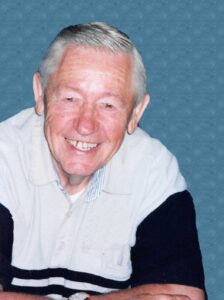 1944, Nick, along with his mother and sister, left their home on a wagon-train, as they were not native Serbian, and therefore were in fear of their lives.  They traveled through Yugoslavia, Hungary, Austria and Germany, avoiding the bombs and gunfire as much as possible.  They ate little and were thankful when people offered food and shelter.  After the war, they settled in Germany where they were reunited with Nick’s father via the White Cross. Nick and his family were sponsored by a family member to emigrate to the United States in 1952. Nick was 13 years old, and the family had no money and spoke no English.  They settled in Detroit, and Nick continued accordion lessons, which he had begun in Germany, and briefly attended Catholic School.  He received little education in Europe during wartime, and between the language barrier and lack of education, Nick was eventually kicked out of school, and thereafter his home at the age of 15. Nick joined the U.S. Army as soon as he could, serving from 1957 to 1959.  He was stationed in France for much of this time and played accordion at the local taverns.  Nick also played at the Paris Opera House, where he lightened the mood with the fast-paced Beer Barrel Polka and Spanish Eyes, earning a letter of commendation from a Brigadier (1-star) General. After completing his enlistment in the Army, Nick began working in machine shops, working his way up from basic machinist to an experienced tool and die maker, draftsman, and eventually a senior level engineer, working at GM for 35 years.  He earned his Bachelor’s degree from the University of Detroit at age 37 after settling in Ortonville with his wife and two youngest children. Nick is survived by his wife Jane (nee Christensen) of 53 yrs.  He is father of Joseph (Cindy) Kovasity, Jennifer (Matt) VanDam, Mark (Kim) Kovasity and Mary Nicole (Brian) Dorsey.  Grandpa of Maxwell, Abigail, Jacob, and Samantha.  Brother of the late Anna Stevens.  Brother-in-law of Dennis and Ronald Christensen. Nick often shared stories with his children describing how he survived WWII and came to live the American dream.  He enjoyed life to the fullest, enjoyed traveling and deer hunting, and was extremely proud to be an American.