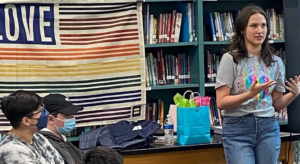 Rowe, 15, founder of the non-profit organization Abigail’s Pride, recently spoke to the Lincoln Park Middle School Prism Club about her organization, how to handle bullying, and why she started her organization in the first place.
“They’re working on passion projects, and their club is all about acceptance and love,” she said. “I put together a presentation about what I’m working on, why I’m doing it for my Gold Award, and talked about the pushback I’ve gotten and resistance for what I’m doing. They asked me about what it’s like to face hate, and if talking about these issues makes it any easier. The kids were so sweet, it was an incredible experience for me.”
Rowe, who came out as bisexual in 2020, said that the idea of starting her organization came from her mom.

“I was driving home around Christmas with my mom, and I was watching YouTube videos of pride festivals, and I said I wished someone would do a pride festival in Ortonville because I wanted to go,” she said. “And my mom turned to me and said ‘so you do it’.”
And Rowe took her mother’s advice and started her non-profit. Her goal is to show members of the LGBTQ+ community that there is a space that is accepting of everyone, especially in Ortonville.
“Ortonville is an area where I know a lot of youth don’t feel safe or loved in our community because they happen to be part of the LGBTQ+ community,” she said. “There are people who look just like you, even in a town or community where it’s not the most accepted thing.”
She said that while the municipalities have been accepting in approving her event permit for the pride festival, scheduled for June 4, there has been some pushback.
“Most of the pushback I get is from kids in my school,” she said. “I get kind of bullied a lot at school, and I’ve gotten some angry attention from parents, but it’s mostly just been high school kids who don’t understand.”
Rowe said at first, she would just ignore the bullying, but said it depends on the day.
“I would be walking in the hallway, and I have pride pins on my backpack, and there were a couple of times the pins were ripped off of my backpack,” she said. “I just ask what their problem with rainbows is.”
This year, Abigail’s Pride will be hosting a pride festival on June 4 in downtown Ortonville. The event has been a year in the making.
“My goal is to make youth and teens feel like they have a safe space to go to, and that our community, our town is a safe place to be,” she said. “And just educating people about the LGBTQ+ community, and making this place a good place to live. I hope one day Abigail’s Pride can be in all different communities and work with counselors and provide services for people in the LGBTQ+ community.”
Rowe also said that while she didn’t face a lot of hate after she came out as bisexual, at first, she knew other people that did, including young kids who didn’t understand why they were being bullied.
“I want to make an environment where things like that don’t happen,” she said. “Bullying happens mostly because people don’t understand.”
The festival on June 4 will start with a parade, and the rest of the day there will be vendors, speakers, food trucks and plenty of games and activities for kids.
“There’s a stigma that events like that aren’t places you should bring your kids, so we wanted to make sure the event was family friendly,” she said.
One thing that Rowe says she has heard the most is that people don’t understand why this is such a big issue or why it matters.
“I think that Ortonville being such a small town, I think that is the reason why we need something like this,” she said. “One of my teachers, he said to me ‘Well, doesn’t that mean it’s working? If people were all on board with it, we wouldn’t need it’ and that’s kind of become my motto for the whole thing.”
Anyone looking to volunteer with Abigail’s Pride, or find more information on the organization or the festival, can find Abigail’s Pride on Facebook or Instagram.