Brandon man charged with assaulting an officer during arrest

By David Fleet
Editor
At 5 p.m., Jan. 19 Brandon Deputies responded to a report of a disorderly subject at a township mobile home community. 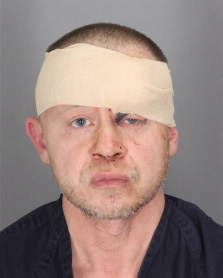 According to the report, Paul Lowry, 40, was upset regarding a late fee on a rental contract on his home and was confrontational with the management of the community. Lowry allegedly existed the management office and was spitting on vehicles in the parking lot.
Deputies arrived and confronted the suspect who had left the office and was in the driveway of his home. He was placed up against his vehicle and patted down for weapons.
“Lowry immediately became hostile toward deputies calling them cowards and asking if they had something to arrest him for,” said Lt. Greg Glover, OCSO Brandon substation who was at the scene. “Deputies advised Lowry he was under arrest, he then spat in the face of a sergeant, during the arrest. He was then placed on the ground and continued to resist until he was double handcuffed.”
Lowry continued to struggled with deputies and appeared to strike his head on the pavement during the confrontation.
Lowry was transported to MOH Clarkston for medical clearance. He received three stitches for a small cut above his left eye and was cleared for lodging on the Oakland County Jail.
At the time of the incident Lowry was out on Sixth Circuit Court bond for an aggravated assault in Oakland County Oxford Township that occurred on June 4, where a baseball bat was used. That bond has since been revoked.
“We have had many contacts with the subject,” added Glover. “The suspect has (randomly) shown up on traffic stops and had become more aggressive with deputies.”
Lowry was arraigned by 52nd District Court, Second Division Magistrate Daniel Schouman on Jan. 22 and held on $25,000 bond. The charges include aggravated assault of a police officer; assault battery; intimidation; felony resisting an officer and disorderly conduct.