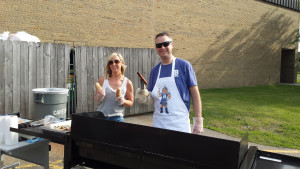 the curriculum director, starting July 9.
“I just finished my 16th school year in Brandon,” said Phillips. “I was hired right out of college, so Brandon is all I know.”
Phillips started off teaching third and fourth grade for nine years, spent a year in the central office, then was a principal for six years, one at Brandon Fletcher Intermediate school and five at Harvey Swanson Elementary.
“I just finished my education specialist degree, which is a post masters degree,” he said. “The reason I wanted that degree is so that I could advance myself in my career. For the last two years, I’ve been looking for a central office position.”
Phillips says that his family lives in Grand Blanc, and that they have a cabin in Kewadin, about halfway between Traverse City and Charlevoix, so he had been looking within driving distance of those few areas.
“It’s always been a dream of my family’s to live in Traverse City, so when we saw the job posting, I put in for it,” said Phillips. “One thing led to another and they made me an offer. It took me a couple of days to think about it and talk about all the pros and cons with my wife, we decided to make the move.”
Traverse City Area Public Schools had a student count of over 9,000 students in the last school year, while Brandon had almost 2,500.
“I’m looking forward to learning about a new school system. As far as size goes, TCAPS and Brandon are polar opposites,” he said. “TCAPS is big, so I’m looking forward to seeing what I can do to help them maintain what is great, and improve their goal areas. I’m looking forward to having an impact on lots and lots of students. On a personal level, I’m looking forward to just being a dad and husband. It’s going to be an adjustment to be a behind the scenes administrator, but it’s also going to be great to go to my kids’ events just as their dad.”
Though he is excited for the new opportunity, he says it would be easier to list the things he won’t miss about Brandon than what he will miss because the list would be shorter.
“ Brandon has been a huge part of my life for 16 years. I’m going to miss the people,” said Phillips. “That’s what was difficult about the timing of this job change. I got the offer after school was out, so I didn’t have the chance to say goodbye in person to so many families and staff members that I have grown close to over the years.”
But what Phillips says he is going to miss most is the kids.
“It’s going to be very strange for me to go for whole work days without just taking a trip through the halls or into classrooms, or throwing the football around with kids at recess,” said Phillips. “My kids have always come to school with me since I became a principal. They were both very sad when we told them we were moving. I think that is a testimony to Brandon as a school system. We are all sad to be leaving because Brandon is a great place to be, but we’re excited for our new adventure in beautiful Traverse City.”